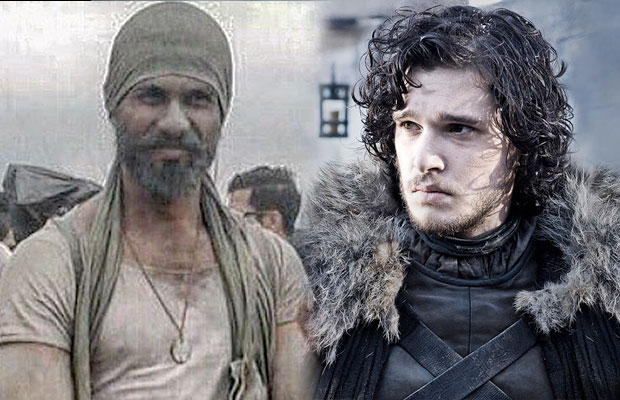 [tps_footer]The most recent episode of Game of Thrones has generated a lot of chatter.

Upon its telecast on 20th June, the Indian audience for the hit American Television Series went berserk with the thought of India replicating a Game of Thrones like drama.

The Indian audience caught the telecast of Game of Thrones simultaneously with the U.S audience via a Live streaming platform Hotstar which made Game of Thrones available to the audience at 7 am on Monday.

The episode took the digital universe by storm.

Throughout Monday, Game of Thrones was trending high and the Indian audience made the most of the time by initiating a deep comparison between John Snow and none other than Shahid Kapoor.

The unanimous choice to play the much loved character from the Series, John Snow was Bollywood’s National award winning actor Shahid Kapoor.

The Twitterati was of the opinion that if the series is replicated in India, Shahid would prove to be the most deserving candidate to play John Snow, the Bastard from Winterfell and the Lord Commander of the Night’s Watch.

The Twitterati drew parallel observations to John Snow‘s onscreen persona and the roles Shahid has been treating his fans with, which ranges from a chocolate boy to that of an intense intriguing character to that of intimidating authority.

Shahid Kapoor‘s journey in Btown reflects the journey John Snow has seen throughout the series.

It is an undisputed fact that Shahid has proven his mettle in acting and has outshined with his versaitality.

The actor who won accolades for his performances in Haider and the most recent Udta Punjab was rooted for aggressively by the Desi Twitterati.

The Digital janta din’t just stop there but also began speaking of the striking resemblance that Shahid and John have.

Wouldn’t it be absolutely thrilling to have Shahid Kapoor sway as Bollywood’s very own John Snow?[/tps_footer]