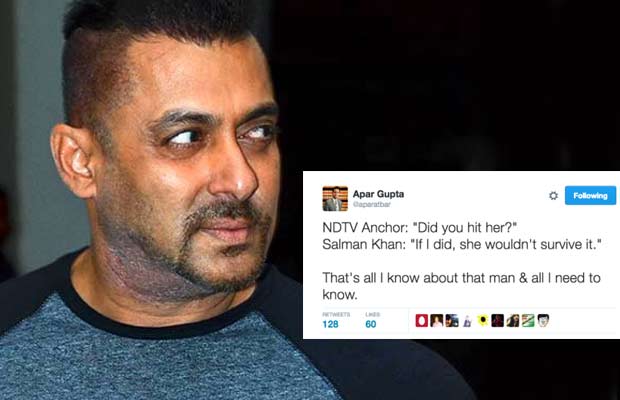 Most of us know about the Salman Khan “slip of tongue” that caused great hate speech and negativity in the media. The Twiterratis are going crazy about it and the worst part is the ones that are speaking up and being ruthlessly bashed by the “Bhai” fans.

For the unknown, and the ones who don’t want to listen to a word against Salman, here’s the summary of what happened. In a recent interview about his upcoming Eid release titled ‘Sultan’, Salman was sharing his experience of the shoot, the wrestling scenes and the hectic time schedules. Amidst all this he suddenly blurted out that the wrestling sequences were equal to getting “raped” and wham!

Of course he said it pretty loud and open and was left with no space to cover up. The media went crazy over this and it is a rightfully outrageous issue currently.  It has taken the shape of a massive blow and looks like thing are not going right for “Bhai”. While younger brother Arbaaz chose to play the diplomacy game, their father Salim Khan who’s quite the gentleman apologized to the media for Salman’s callous behavior.

Amidst all the controversy, old accusations against the actor have resurfaced when the editor of The Hindu, Sachin Kalbag tweeted about a controversy which has taken a major shape and Salman seems to be in a fix!

Looks like Sultan is getting enough promotional drama and a major lash out.