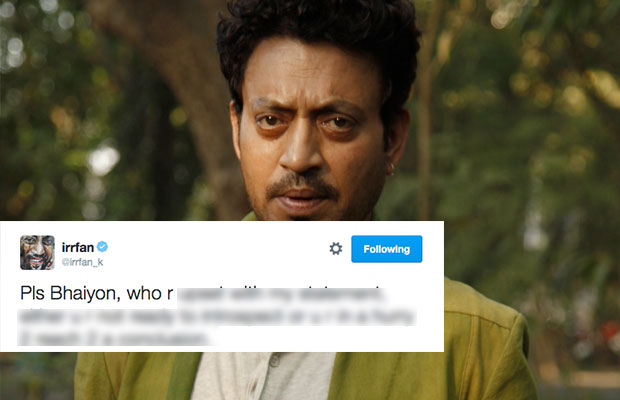 During the promotions of his upcoming film Madaari in Jaipur, Irrfan Khan said that sacrificing an animal on Eid-al-Adha has just been reduced to a ritual. He further went on to say that animals are being slaughtered in the name of ‘qurbaani’. Irrfan Khan also added saying that people have lost the real relevance behind the religious activity and they perform it without knowing about it.

Well, finally Irrfan Khan took to his twitter handle and has reacted to the whole controversy saying, “Pls Bhaiyon, who r upset with my statement, either u r not ready to introspect or u r in a hurry 2 reach 2 a conclusion. For me religion is abt personal introspection , it’s a source of compassion, wisdom and moderation n not for stereotyping n fanaticism. Clerics don’t scare me !! Thank God I don’t live in a country governed by religious contractors (thekedars ) #FREEDOM.”

Well, it seems Irrfan is not apologetic for what he has said and thinks that people have reached to a conclusion very quickly.