Actress Navina Bole was robbed on the streets of Link Road while she was heading towards Citi mall. She plays the role of  ‘Tia’ in a T.V. Series on Star Plus namely, Ishaqbaaz. This newly hitched actress is having a bad time ti seems.

She had just parked her car outside the mall during peak hours and even in such a rush the robbers finely broke the windows and took away her purse. She said she had kept it inside the car as she was going to come back in a bit, but the robbers were as fast as light and Snap! They stole it.

She was shocked by the reaction of the public as no one reacted for the same, she says “It is really disgusting how one could just smash the window of the car and take my belongings. Shockingly, no one saw the culprit doing the crime and neither was anyone bothered.” Looks like they were really very quick, maybe professionals!

She also added further by speaking of her complaint, “I have lodged a complaint today and I really hope the miscreant gets caught soon. Seems like there is a gang working as I was aghast that a guy came to the police with the same case. It’s really disturbing and I hope police manage to nab them. I also want people to know that it isn’t safe anymore to keep their belongings in the car even when they step out for a moment.”

The newly married bride looks a little more than just annoyed over this incident, that’s why she took it to Facebook and posted a careful message over there. 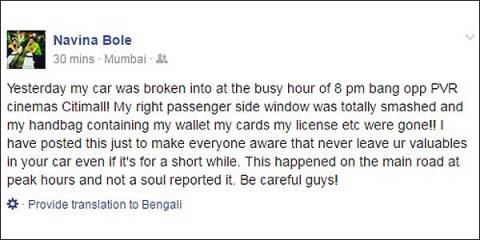 She is married to Karan Jeet and we wish her a happily married life. We also wish that those robbers get caught ASAP.