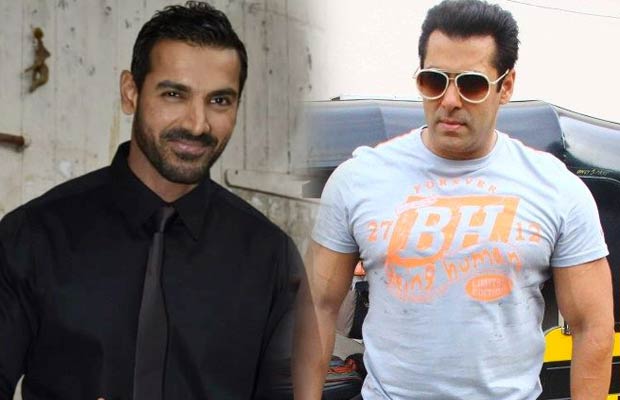 [tps_footer]We all know and must have read about the reports claiming not all is always well between these two handsome hunks. Don’t know if Billo Rani, Bipasha Basu, is the reason for the two stars to never be friends, or both John Abraham and Salman Khan don’t really have anything in common to be friends with each other. It’s something weird, because both of them are super friendly stars when it comes to interacting with their fans and being part of public events.

John especially, always had a calm behavior even with media, especially when media kept questioning about his marriage issues, but he never commented on it. Where as Salman Khan has shown and given enough of answers to media, a lot of times sarcastically and at times miffed with the photographers, journalists and many more. But both of them are loved and adored by their fans truly.

Recently during an interview, John was asked for any similarity of the story of his movie Rocky Handome with Salman Khan starrer action flicks. Here is what he said, “John was asked if his action film would be on the lines of a Salman Khan action film, the actor said that he could only talk about Salman’s last year’s release ‘Bajrangi Bhaijaan.’ Not only did John call the film ‘beautiful,’ he also praised it for having no action and only emotions. He further said that ‘Rocky Handsome’ was a content driven film and that the action sequences in it were not exaggerated.”

In Bajrangi Bhaijaan, Salman Khan tried his best to make cute Munni a.k.a Harshali Malhotra meet her family staying in Pakistan and in John Abraham starrer Rocky Handsome their is a young girl who keeps calling John, “handsome” in the movie. We are not surprised !! And this flick’s story revolves around the fondness of the gangster played by John for this young girl who get taken away from him by some baddies. Rest of the story we will leave for you to watch.

But John‘s answer was to the point and hope Salman reads this and also has something nice to say about our super handsome and sweet Johnny Boy and his upcoming movie Rocky Handsome.[/tps_footer]