[tps_footer]Mohanlal is a name synonymous with Malayalam cinema. The veteran actor’s career spanning decades is illustrious and definitely one that many would aspire to emulate. The veteran has, without the slightest bit of doubt, established himself as a force to be reckoned with thanks to his  vast range of talent as a performer, strong personality, expressive voice and of course  due to his flawless  style of acting.

His fans are probably one of the craziest and his fan following is huge! Recently, everyone’s beloved ‘Lalettan’ shared the title of his latest big screen outing. Reaching out to his supporters via Twitter, the 56-year-old said that the film would be called Oppam. Well, Twitter has become a very integral part of any actor’s effective communication arsenal and that is why it comes as no surprise that Mohanlal too chose to employ Twitter to get the message across.

Interestingly, Oppam will be filmed by Priyadarshan who is credited with stellar films even in the Hindi film Industry. It marks the filmmaker’s first collaboration with Mohanlal after a very huge gap spanning a few years.

The actor-director duo has previously collaborated for films such as Kaalapani and Thalvattam to name a few. While this duo has certainly enjoyed success, it now remains to see whether the break has done any damage to their creative processes. As far as Oppam is concerned, it is a crime-drama and features Mohanlal in the role of a blind man.

Are you as excited as we are? 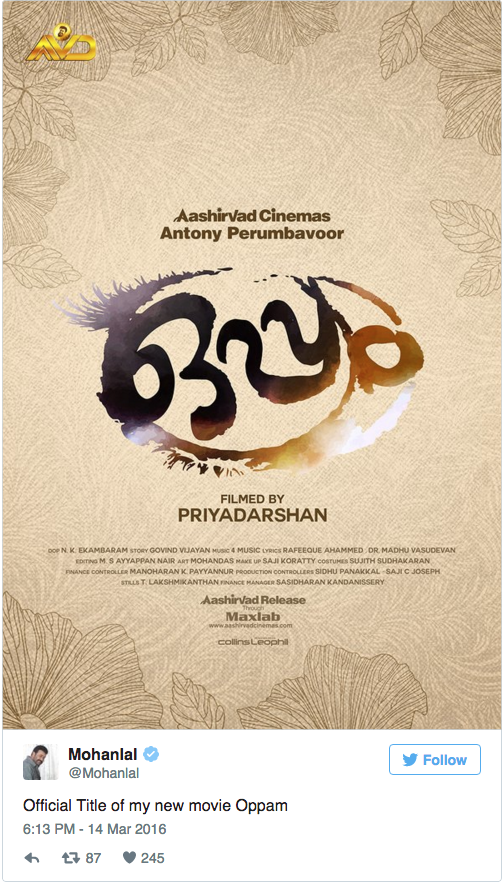