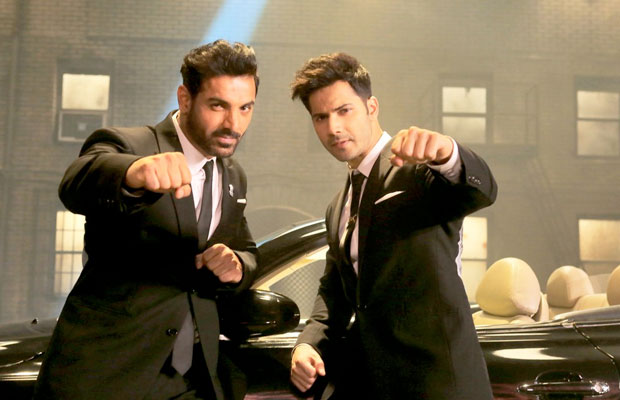 [tps_footer]’Dishoom’ is  going to be one super action-comic film of the year. The film has Jacqueline Fernandez, John Abraham and Varun Dhawan in the lead. ‘Dishoom’ is directed by Rohit Dhawan and by the trailer we can say that the film is going to be a good one. The film is all set to release on July 24th, 2016. Yesterday, we told you about the urban cool song ‘Toh Dishoom‘ from Dishoom which has been launched today. The song is choreographed by Ahmed Khan and it was shot at Mehboob studio. It is a cool quirky rap song sung by Pritam, Raftaar, and Shahid Mallya.

Speaking about the song, ‘Toh Dishoom’ is good to watch since it has Varun and John in the macho avatar. The rap elements of the song is delightful to hear. But sadly the song is not as great as we expected it to be. On the singing part, the singers have given their 100% but somehow the lyrics of the song is just average. Listening to the other tracks of Dishoom we thought that this one is going to be their best but sadly the song has visual appeal but not musical appeal. You will like to watch the song but when it comes to hearing you might consider listening to it only twice or thrice.

Overall it was great effort but somehow the makers did not manage to pull down the song really well. We rate this song as 2.5 stars.

Meanwhile, do watch the video of the song and tell us about it in the comments below.