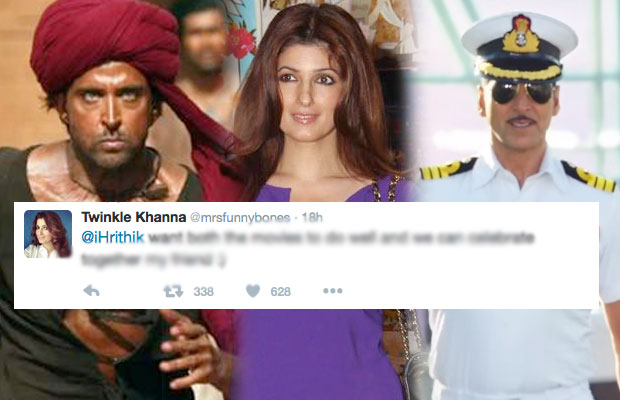 [tps_footer]As we all know, Rustom and Mohenjo Daro are all set to release on August 12, 2016. Both these film have a great star cast and the trailers of both the films are equally good. While Rustom has Akshay Kumar, on the other end, Mohenjo Daro has Hrithik Roshan.

Both these films will epically clash at the box office. But neither actor has commented on this impending collision but Akshay’s wife Twinkle Khanna has told Hrithik that she’s rooting for both films. This conversation happened on Twitter after Hrithik, 42, praised the trailer of Rustom, which released on Thursday.

It will be really thrilling to see which film will impress the audience and which will be the first film to enter the 100 crore club. We must say we are really excited to witness both these films. Rustom, directed by Tinu Suresh Desai, features Akshay Kumar as naval commander Rustom Pavri, a fictionalised version of K-M Nanavati who was tried and acquitted for the murder of his wife’s lover, leading to the scrapping of India’s jury system.

The film also stars Ileana D’Cruz and Esha Gupta apart from the 48-year-old actor. While, Mohenjo Daro directed by Ashutosh Gowariker is been based on the ancient history of India.

Do watch the trailer of both the films and tell us which one is your favourite in the comments below.