As we all know, Shah Rukh Khan’s Raees and Hrithik Roshan’s Kaabil clash was one of the biggest cash of titans that began at the start of 2017. The directors and producers of both the films tried their best to avoid a clash. However, nothing could happen.

Kaabil’s producer Rakesh Roshan was in no mood to shift the release date of the film. The director-producer said that he can’t do anything if it is clashing with SRK’s Raees as he had announced the date of his film’s release a much earlier.  Rakesh Roshan and director Sanjay Gupta were adamant on the fixed release date and so were Shah Rukh Khan’s Raees makers even after much discussion and meetings.

Post release of their films, Rakesh Roshan alleged that the exhibitors were giving SRK’s film the upper-hand by giving them more screens despite it was on agreed basis of 50-50.

Now after almost months of release, Sanjay Gupta has sly-tweeted about Shah Rukh Khan. To people who are not aware, Akshay Kumar recently announced the release of his upcoming film, Toilet: Ek Prem Katha on the same day as Shah Rukh Khan’s next directed by Imtiaz Ali. Both the films are clashing on the Independence Day weekend and is going to witness another huge box office clash.

Taking a dig at it and expressing his happiness on how SRK’s film has to now clash with Akshay Kumar’s film,  Sanjay Gupta tweeted, “KARMA, you beauty! I love and believe in you so much. I love how you go after all that f*** with you. KARTAM BHUKTAM on Independence Day.” 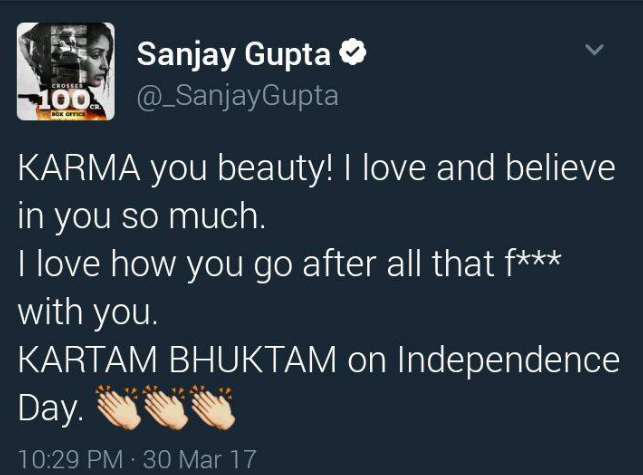 After Sanjay Gupta’s this tweet, Shah Rukh Khan fans started trolling him, which forced him to delete the tweet immediately. It seems, Sanjay Gupta still can’t get over the Raees Vs Kaabil clash. We wonder for how long!