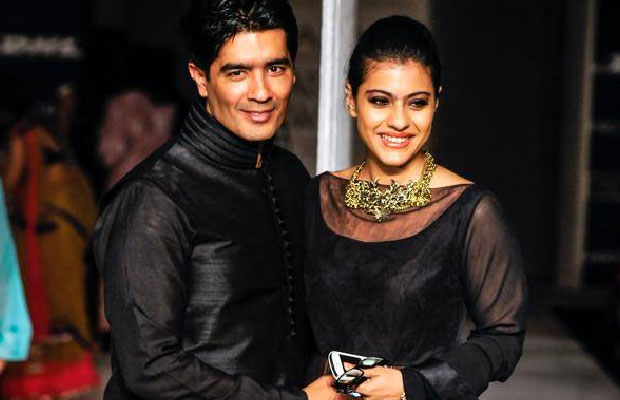 The tinsel town is a tricky place for all. The B-Town is a place where friends turn foes and foes turn friends. The unpredictable town abides by the phrase, ‘there are no permanent friends and foes in the industry’. Well, one such rumor has stroked off between elegant actress Kajol and celebrity designer Manish Malhotra.

School of fashion and the big daddy of attires Manish Malhotra is a favorite of all actresses. Manish Malhotra is known for sharing a good rapport with almost all B-Town ladies. It is also a well-known fact that Manish and Kajol share a great friendship which goes years back and the talented designer has given one of his best works to the expressive actress.

Well the rumor mills suggest that something is not right between Manish and Kajol currently. The two have apparently stopped collaborating. It is speculated that Manish who was supposed to design Kajol’s attire for the film ‘Dilwale’ opted out of it as there were creative differences between him and Kajol. Head strong actress Kajol refused to approve and abide by Manish’s designs and instead included her own inputs for the same, which irked Manish.

Reports suggest that, Manish opted out of ‘Dilwale’ and will now instead start with the film ‘Ae Dil Hai Mushkil’. Kajol and Manish’s friendship goes right to the film ‘Dilwale Dulhania Le Jayenge’, the two talent bundles are known to be best friends just like SRK and Kajol. On many platforms, Kajol and Manish have also confessed that they love each other’s work and therefore will always team up together.

All we hope is that the two bury their hatchets quickly and we get to see Kajol draped in Manish Malhotra’s statement nine yards. Currently, Kajol is finishing off the last shooting schedule of the film ‘Dilwale’ which is directed by Rohit Shetty. The film also stars actors Varun Dhawan and Kriti Sanon in lead roles apart from SRK and Kajol. The film is scheduled to hit the screens on December 18, 2015.