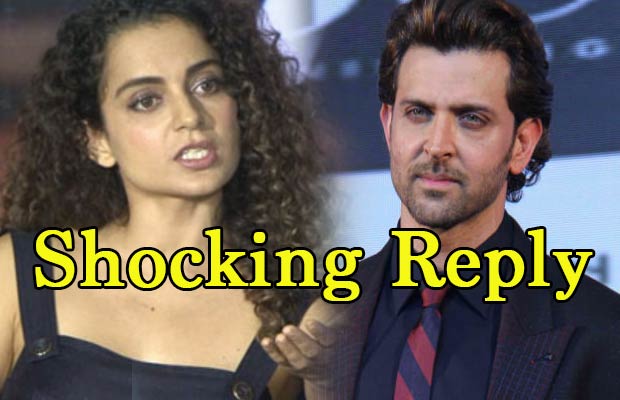 [tps_footer]The war of words between Kangana Ranaut and Hrithik Roshan is going nastier with both of them accusing each other. Reportedly, Hrithik Roshan has accused Kangana for stalking him and sending 50 mails per day, while Kangana has accused Hrithik for hacking her email id and to delete their private correspondence as it could have complicated his divorce case.

In response to Hrithik Roshan’s counter charges for seeking an apology from Kangana, the legal notice of the actress states that she doesn’t feel the need to give any statements on the social networking sites, as demanded by client (Hrithik).

Kangana‘s notice, issued through lawyer Rizwan Siddique, says, “She does not feel the need to give any statements on the social networking accounts as demanded by your client. She never needed the name or reputation of your client to garner publicity, therefore your client should fully realise and face the truth that my client herself is a wellknown celebrity who has achieved stardom on her own, despite being the first generation in this business and in the light of these apparent facts, your client should immediately accept the truth and withdraw the notice containing absolutely untenable, baseless and wild claims and allegations.”

To Hrithik‘s threat to reveal his communications with her, the notice says, “If he circulates her emails, images and/or other material which your client willingly received in good faith from my client, then upon such circumstances, it shall be rightfully deemed that your client is wilfully seeking to not only defame her and issue unwarranted threats. These actions shall be taken “extremely seriously.” She will then have no option, but to file criminal proceedings against your client, at his risk, costs and consequences.”

The ugly fight between the alleged ex-couple started when Kangana Ranaut called Hrithik her ‘silly ex’. In an interview, Kangana was asked if she was aware about Hrithik ousted her from Aashiqui 3.  To which she had replied, “Yes, many lame rumours are doing the rounds, even a dumbass can tell where these rumours are coming from. I don’t know why exes do silly things to get your attention. For me, that chapter is over and I don’t dig graves.”

The fight turned nasty after Hrithik replied to Kangana’s statement in an insulting way. The Bang Bang actor tweeted, ”Ther r more chances of me having had an affair with d Pope dan any of d (Im sure wonderful) women d media hs ben naming. Thanks but no thanks (sic).” 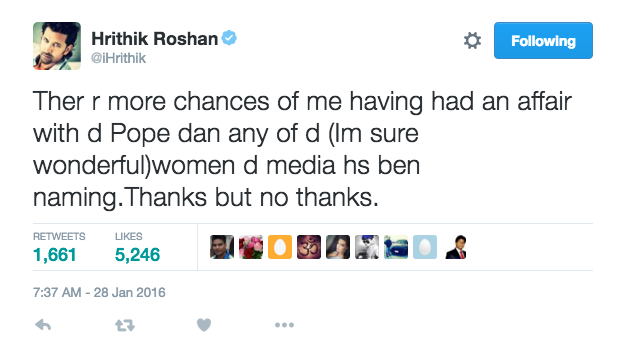