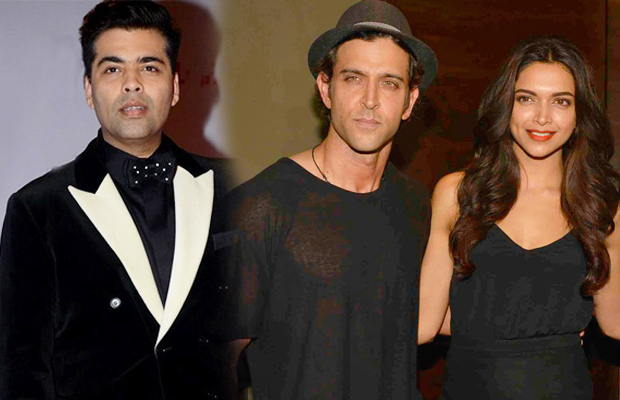 Recently one was named the sexiest Asian woman in the world and the other ranked 3rd in the most handsome faces of the world. We are referring to none other than Deepika Padukone and Hrithik Roshan.

Now imagine the two of the most good looking people in B-Town sharing screen space, exciting? Yes and it’s not just imagination, we will also get to see them together!! Yes, finally seems like the two will share on-screen space for the first time ever. And this movie is going to be produced by none other than, Karan Johar and helmed by Karan Malhotra.

It seems like Hrithik has already given his dates for the film and will start working on it from March. As for Deepika, she really liked the script and has shown her willingness to do it. But the Tamasha star hasn’t been able to commit for the dates as she is currently filming for Sanjay Leela Bhansali’s periodic drama, Padmavati and can start shooting only once that movie is wrapped.

There were reports in the past suggesting that the two are being paired opposite each other in a Yash Raj Film in Thug (now titled Thugs of Hindostan). However, due to some reason, Hrithik opted out of the film. The movie now will see Amitabh Bachchan and Aamir Khan sharing the screen space together for the first time.

Finally, we get to see Hrithik and Deepika together for the first time. And it’s a Karan Johar film, can we safely assume that it will be a glamour looking film which only add to the sexy quotient brought in by these two gorgeous looking stars.

This is getting super exciting! Can’t wait!