Contrary to the bold statement made by the Raees director Rahul Dholakia and the media reports on Mahira Khan coming to India to promote the film, she is not and Shah Rukh Khan took on himself to make sure this doesn’t lead to any trouble for the film.

Rahul in a statement had said, “If we find it necessary to bring her here and involve her in the promotions, of course, she will come. I don’t think there is any restriction for her from the government. Aisa nahi hai ki they stopped issuing visas to anybody to come from there. So I think as and when we will decide to involve her, we’ll get her to come.”

The events took an unexpected turn when Shah Rukh paid a visit to MNS chief Raj Thackeray to discuss the peaceful release of his film, Raees, that sees Mahira Khan, a Pakistani actress in the lead role. When media was buzzing with the news that SRK has flown to Dubai to shoot with Mahira for some remaining portions of Raees, SRK was making peace with the MNS chief who have strong opinions about Pakistani artiste working in Bollywood and are vehemently opposing the release of such films.

The picture of Shah Rukh with Thackery has made it to the internet. In this meeting, SRK promised he will never collaborate with any Pakistani artistes in future. In fact, stressing more on Raees, SRK made sure he told Thackery, that there are no plans or even intention of getting Mahira in India to promote the film. This meeting has sealed the deal that except for onscreen, there’s ‘No place for Mahira’ in India.

Confirming the same to a leading daily, Amey Khopkar of MNS said, “There was news in the media for past one week that SRK is going to get Mahira Khan to India for film promotions. So he came here to meet Raj saheb to tell that Mahira Khan is not coming to India for any kind of film promotion and he will also not cast any Pakistani artistes in future.

Karan Johar’s Ae Dil Hai Mushkil came under the threats of MNS, post the ghastly Uri attacks when MNS opposed the release of the film as it starred Pakistani actor Fawad Khan. After paying a hefty fine of Rs. 5 crore, the movie was allowed to have a peaceful release at the box-office.

The MNS and Shiv Sena have been known to oppose Pakistani artistes’ involvement in Indian television shows and films after terror attacks in India.

Seems like SRK thought it was wise to blow off the tension before it rises and hits another level. Good move, SRK! 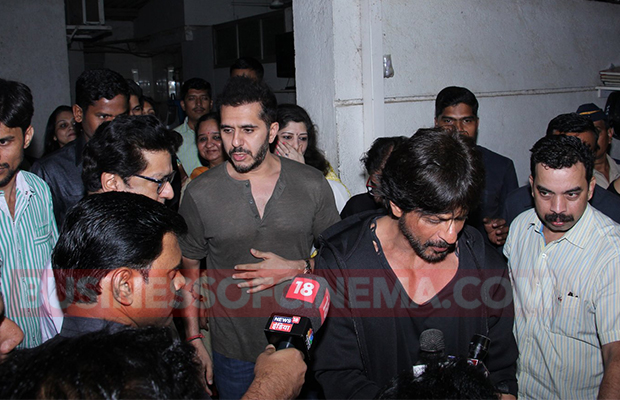