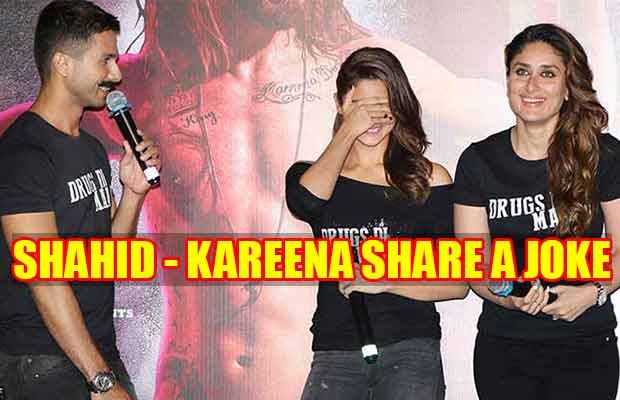 [tps_footer]Bollywood’s most talked ex-couple Shahid Kapoor and Kareena Kapoor Khan shared the stage after very long time at the trailer launch of their film Udta Punjab. The two stars who once dated each other came together only for their film but shared much of awkwardness while addressing media. Somewhere Kareena Kapoor Khan looked comfortable while sharing the stage with her ex but Sasha looked very much reserved. In fact, many times Sasha also avoided Kareena during the trailer launch event.

Well, the film is nearing for the release and according to reports, it is said that the ex-couple is sharing a comfort level with each other. Reportedly, at an event both were heard sharing a joke with each other. As quoted in DNA, an onlooker said, “Shahid is very gung-ho and excited about Udta Punjab so he was telling the promotional team and Kareena, Diljit Dosanj and Alia Bhatt that they should go all-out and fly skyhigh doing various stuff to promote the film.”

To which Kareena retorted, ‘Oh you are one to talk Shahid! You don’t drink or smoke so how can you fly high?”

Well, Shahid and Kareena will not be sharing any screen space together in the movie but its great to hear that the two are bonding again.

Talking about the film, Udta Punjab is a story of four completely different individuals. Apart from Shahid Kapoor and Alia Bhatt, the film features Kareena and Diljit Dosanjh. Kareena Kapoor will be seen playing the role of a doctor in a de-glam avatar while Diljit Dosanjh will be seen in a cop role. Directed by Abhishek Chaubey, the thriller will be having a drug mafia, and the characters of the film will be revolving around the storyline of drug abuse amongst the youth.