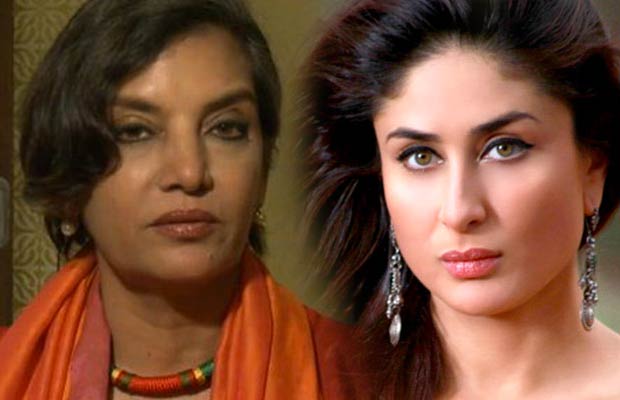 [tps_footer]While most of Bollywood’s top crop prefers to keep mum or remain politically correct and diplomatic, there are some who simply do not care about being branded as outspoken. There are few people who have the guts to say it as it is and call out people. One such fierce individual in Bollywood is Shabana Azmi. Veteran actress Shabana is one of the few actresses who voice their opinions without any fear of being rebuked.

At a recently held event of ‘Women Of Worth’ campaign on women’s day she got candid and voiced her opinion on a number of women-related subjects and issues. She also opined about today’s item numbers in Bollywood.

One of the most interesting comments by her was on Kareena Kapoor Khan’s ‘Fevicol se’ from Salman Khan’s super hit movie Dabangg 2. She criticized the song and especially the way it objectified women. She said that she has reservations against item numbers. That’s because according to her, if a top most heroine is singing ‘I am tandoori murgi, swallow me down with alcohol’, it’s not a laughing matter. Azmi believes that this is a serious issue. One person wrote the song, a few more got it made but it was watched by crores of people. These people were influenced by the song and she added that they also saw their 6-year old kids singing and dancing on it.

She added that being a top actress in the industry, Kapoor had a responsibility towards the public and that her portrayal was setting a wrong message to these people.

Wonder what the Choti Begum of Bollywood has to say to Azmi![/tps_footer]