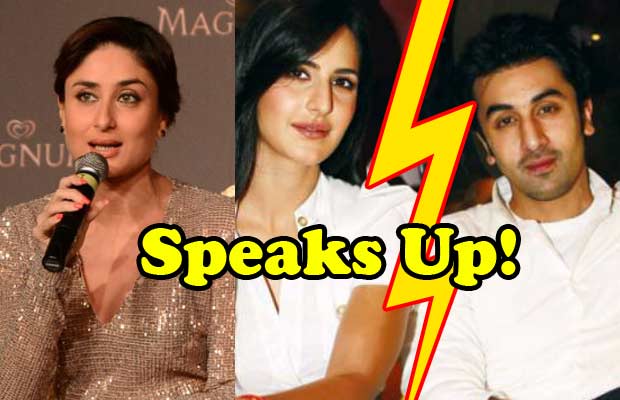 [tps_footer]Bollywood actors Ranbir Kapoor and Katrina Kaif have still maintained silence over their break up, but their ignorance and silence makes pretty much clear that the two are not together anymore. Not only the two estranged couple, but even their families have ignored to comment on their relationship status.

Recently, Ranbir Kapoor’s sister Kareena Kapoor Khan was asked about her brother Ranbir Kapoor’s break up. To which she replied saying, “Even if Ranbir has spoken about it to me, it’s a personal matter that I’d never discuss it with the media. I love my brother and wish him only the best in life, always.”

Well, Kareena obviously ignored to speak on her brother’s break up with Katrina, but if observed, she didn’t even deny the break up, which clearly indicates that the duo have split.

During the same time, Kareena was also asked about the many break ups and divorces in Bollywood. “There’s no formula. Sometimes after 20 years, a relationship just doesn’t work, you meet someone else and something just clicks,” Kareena responded.

Earlier last year, at ‘Koffee With Karan’ show, Kareena was pretty much excited for her brother’s marriage. In fact she had also revealed that the she would be dancing on Katrina’s famous songs.

Well, these proofs surely indicate that the duo is not together and also they are not spending time with their common friends nowadays. Ranbir and Katrina, who are good friends with producer Manmohan Shetty‘s daughter Aarti Shetty, also avoided coming face to face at Aarti’s birthday bash recently. While Ranbir Kapoor did come with Anushka Sharma and others at Aarti’s birthday, Katrina was missed at the do.[/tps_footer]