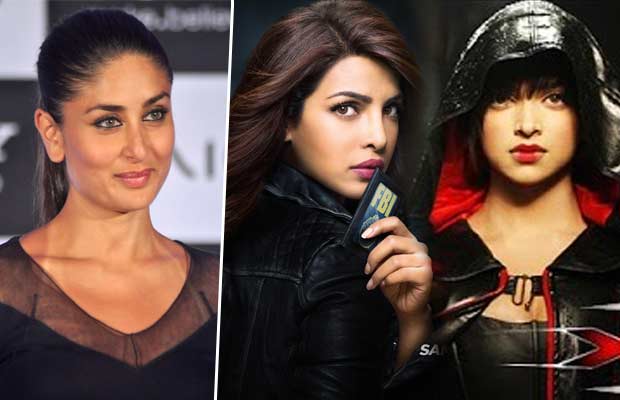 [tps_footer]Kareena Kapoor Khan, barely interacts with media other than when it’s time to promote her movies and endorsements. Well, that’s also being professional, because this beautiful diva is available to answer all the questions, not just related to her and her work but even about her contemporaries, whenever she faces the media.

Ki and Ka movie’s trailer and it’s first song “High Heels” is getting all good responses so far and it’s gradually increasing the curiosity in audiences to know more about this movie and to watch it soon. But other than this, there is something else that even the media couldn’t stop from asking. Keeping the year of break ups and divorces aside, it’s also the year where our Indian beauties are making waves across the world especially in the West. Just like Deepika Padukone is doing after bagging “xXx The Return Of Xander Cage“, even Madhuri Dixit Nene has expressed her desire of working in a Hollywood movie and she picked the hot “Hangover” series actor Bradley Cooper opposite her. Now stop imagining him !! Plzz get back read ahead and also Kareena Kapoor Khan‘s “katti batti” dost Priyanka Chopra soaring higher by first storming the West with her television series “Quantico” and now Hollywood movie “Baywatch” opposite Dwayne Johnson.

So, the obvious question was when is Kareena going to be seen in a Hollywood movie and she said during a recent interview that her “priorities are different” and that working in Los Angeles, USA is not for her but she is very proud of Priyanka Chopra doing so well in the West and making India proud. She doesn’t see Hollywood as her next destination to work and I guess she is more use to working in Bollywood and flooring every one by her trademark “latka jhatkas”. Sad !! West won’t get to see our bombshell Bebo but should we be more happy about the fact that she is all there for us and will continue working in Indian movies ??

Kareena also said that she would want a family life and be a successful working actor. Basically, she has no plans for taking sanyaas from B-Town after marriage and indirectly hinting at motherhood too. She is already a terrific actor and beloved begham of Chhote Nawab Saif Ali Khan. So, she is occupied with a lot of things here itself. No wonder Why she has no time for thinking about having a career in Hollywood too.

People, now your turn to tell us. Would you like to see Kareena in any Hollywood flick ?? If yes, then which actor will be the ideal hunk opposite our extremely gorgeous Bebo ????[/tps_footer]