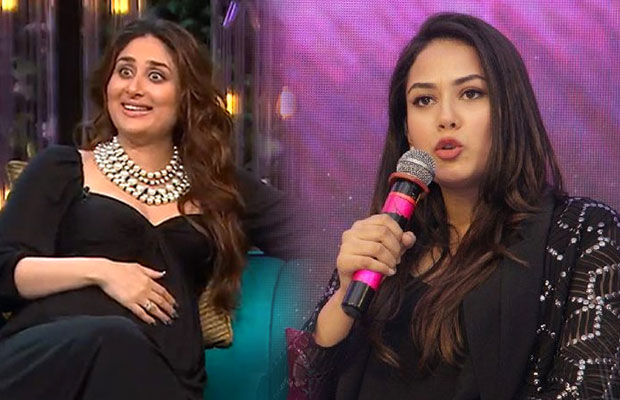 Bollywood actor, Shahid Kapoor’s wife Mira Rajput was hit the headlines for her comments and views on working mothers. Mira was called to be a part of some Woman’s Day seminar where she made dissing remarks about a mother who chooses to leave her baby at home and go to work. Mira said that her baby is not a puppy and she wants to be by her baby’s side all the time.

This obvious started a raging debate across the country and her comments received a lot of flak for her insensitive comment that were made in an elitist manner. Kareena Kapoor Khan, who was Shahid’s ex is at the other end of the spectrum. She became a mother to Taimur in December last year.

She was unstoppable during as well as after her pregnancy. She was working, walking for fashion shows, attending parties and even appeared on chat shows will pregnant. She made a baby-bump a style statement.

It would be interesting to know what Bebo thinks of Mira’s comments.

So, in an interview with Bombay Times, Bebo said, “What kind of a mother I am is something that will unfold with time. I will not scream from rooftops about experiencing motherhood or how much I love Taimur. There’s always the pressure of being judged, no matter what you do. It’s about how you deal with it. Every pregnancy and every mother’s journey with her child during those nine months and afterwards is different. You can’t draw parallels. No one out there really knows me or what I am feeling at a given time. How can anyone decide on my behalf whether I am supposed to feel depressed or if I can step out before 45 days? If I’m spoken about like that, what would it be like for other women?”