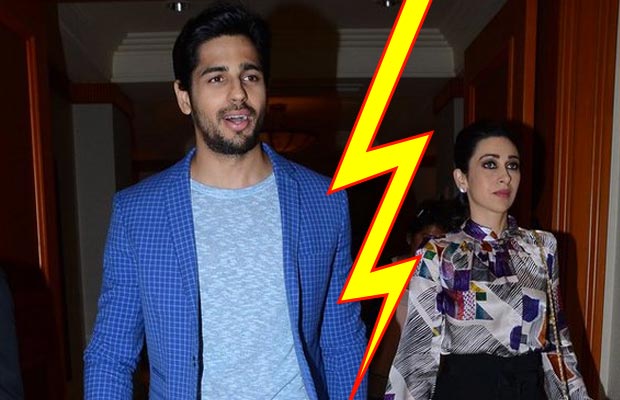 [tps_footer]Bollywood’s handsome hunk Sidharth Malhotra who is shooting for his next upcoming film ‘Baar Baar Dekho’ with Katrina Kaif, had reportedly striked a cold war with the versatile actress Karisma Kapoor.

Recently, Sidharth Malhotra and Karisma Kapoor were guest of honour at the promotional event. Before the event started, Sidharth had already informed that he has to leave early and alarmed the organizers that he needs to wrap up early. Accordingly, the organizers also arranged for his quick leave.

Being a senior in the industry, Karisma Kapoor was suppose to deliver the speech on health awareness for the World Diabetes Day. But as Sidharth had already informed about his early exit, the organizers gave him mic first to deliver the speech. Reportedly, Karisma Kapoor sat silent and smiled while Sidharth was giving his speech, but later what annoyed her was when Sidharth Malhotra left the event soon after his speech was done, indicating that he is getting late.

Sidharth had also requested Karisma to deliver the speech first, but according to the reports, she bluntly replied him saying, “you are getting late.” It seems Karisma Kapoor was not happy with Sidharth’s attitude, being senior to him.

Well, the cold war between the female actors is not surprising, but its comes as a surprise to see a newbie sideling the most experienced actress of Bollywood, if reports are true in anyway. [/tps_footer]