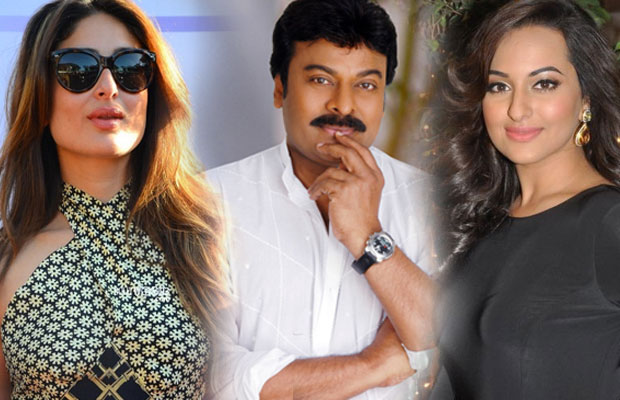 [tps_footer]South Superstar Chiranjeevi‘s comeback film which is going to be his 150th, has grabbed all the eyeballs ever since it was announced. His comeback is also making headlines for another big reason. The makers of the film are running difficult to find the perfect leading lady for Chiranjeevi’s comeback Telugu film, as it is going to be one of the biggest films of his career. Recently, we heard, Katrina Kaif was approached, but the actress turned down the project due to some reasons.

Since then the makers of the film are finding a leading lady for the upcoming Telugu film, which would be a remake of Tamil hit Kaththi. As per recent reports, it is said that Bollywood actresses Kareena Kapoor Khan and Sonakshi Sinha were approached for the same. While Kareena is expecting, she could not be the part of the film for the obvious reason.

On the other hand, Dabangg actress Sonakshi Sinha has reportedly excused too. It seems the script and their role in the film have not impressed these actresses, which made them give some or other excuse. It is really shocking to know that Bollywood actresses have rejected to be a part of the biggest superstar, Chiranjeevi’s film.

Reportedly, Kajal Aggarwal, who had quit Chiranjeevi’s film initially, will be joining the shoot in the third week of August. No confirmation regarding the same has been made yet.

The upcoming untitled Tamil film is being directed by VV Vinayak and would be produced by Ram Charan under Konidela Productions banner.[/tps_footer]