Even after breaking off together, there is one thing keeping Ranbir Kapoor and Katrina Kaif bound which is Jagga Jasoos. After several years of a relationship, they called for a breakup and got separated from their common house. While being in a relationship, the two were not seen together on screen. It is after Rajneeti that the two will be seen together after 7 long years.

Well! if not together in a relationship, we will at least see the two on screen in Jagga Jasoos. Surprisingly, the fans are loving it how the film is also bringing them together. The poster launch where Katrina was seen laying her head on Ranbir‘s shoulder went viral. This picture was also shared by the leading lady where she captioned the picture as “”I’ve seen fire and I’ve seen rain , seen sunny days that I thought would never end…… Jagga the journey is on. #JaggaJasoos UTV Motion Pictures #AnuragBasu #RanbirKapoor“. 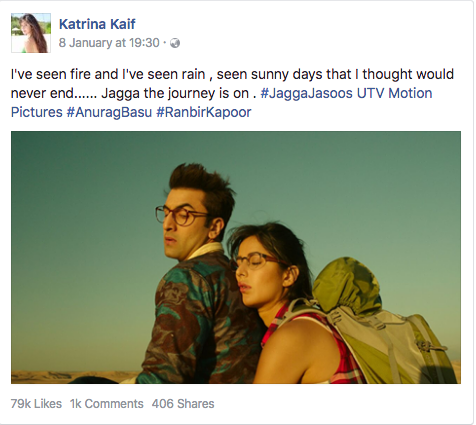 Despite hardships with their relationship, both Ranbir and Katrina have decided to be fair to their professional lives. In fact, the two were never seen passing negative comments about each other.

Katrina Kaif  is seen sitting behind Ranbir and they look exceptionally cute together that way.

What’s exciting the fans and media is how will they face the media when they’ll be seen together at the promotional events. Promotional events and press conferences usually target the stars with both their personal and professional lives. So, how has the duo decided to tackle is one big question to the fans. Are they finally going to open up? Will they go numb and avoid the questions? Or Will they act professional?

Jagga Jasoos will hit the screens on April 7 this year.