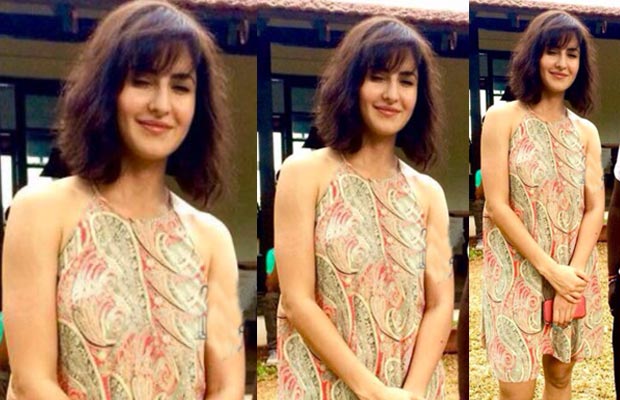 [tps_footer]Katrina Kaif is all set to experiment with her look in her upcoming film ‘Baar Baar Dekho’. The actress who is a perfecto in every character will be seen in a totally different avatar in her upcoming romantic flick. Katrina has been much in limelight lately for her relationship woes. The diva has constantly garnered headlines for her hearty issues with beau Ranbir Kapoor.

Well, apart from her personal life, Katrina Kaif is now the talk of the town for her look in the film. The actress who looks flawless in her long locks will be sporting short fringes and bangs for the film ‘Baar Baar Dekho’. The picture from the sets of the film sees Katrina in a short hair do with short flicks, she surely looks younger and cute. The beautiful star has mostly sported long hair until now but we are drooling over this new look too.

Looking all cute and adorable, Katrina is nailing her short hairdo to the core. Dressed in a short knee length printed halter neck maxi, Katrina Kaif is surely looking all different and unique. The actress will be seen opposite actor Sidharth Malhotra in the film ‘Baar Baar Dekho’.

The movie is much in limelight for its unusual star cast. Sidharth Malhotra is new in the tinsel town as compared to Katrina Kaif. The two mind blowing actors are nevertheless ready to sizzle on the silver screen. The film will be a debut for filmmaker Nitya Mehra. Not much about the movie plot is revealed as of now, but it is said that it is a love story based on time travel and age. The actors are speculated to be carrying looks of different ages.

Well, going by Katrina Kaif ‘s look we are surely curious for the movie now. The film is still in its shooting schedule which has initiated just a while ago.

Also Read: 10 Upcoming Bollywood Biopics To Watch Out For!