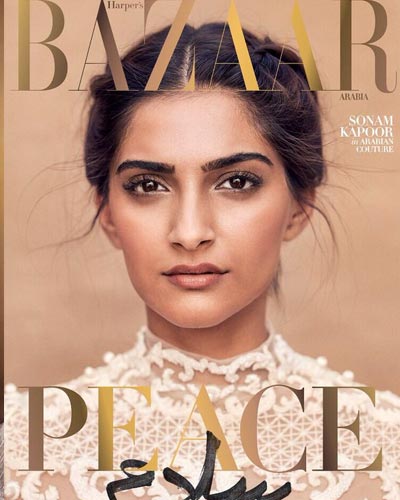 [tps_footer]Sonam Kapoor is riding high on the success ladder with her recent blockbuster hit. The Prem Ratan Dhan Payo actress is surely on cloud nine after garnering all the positive reviews for her acting skills in the film. Sonam is not only brushing her acting skills to perfection but is also setting a new branch in fashion and trend. The actress is undoubtedly a favorite of magazine covers. With her poise and élan, Sonam is yet again looking no less than a dream on the cover of Harper Bazaar’s Peace issue.

The December issue of Harper Bazaar Arabia features Sonam Kapoor in a stern look. The fun loving actress is shedding off her happy go lucky avatar for the peace issue. Mind blowing actress Sonam is nailing her intense look on the cover. Wearing high collared attire, the cover sees Sonam Kapoor in a deep close up. Giving an impetus to her well defined features and focused eyes, Sonam is seen in an unclad make up look.

The Peace issue of the magazine is not featuring only the glam side of the world but is rather an issue which focuses on other aspects too. Sonam Kapoor is also seen in an unapologetic mood on the cover. The diva is flaunting immense confidence and intellectuality.

The magazine will feature Sonam’s views on the life she has been gifted with i.e. a privilege for many. The head strong star will also disclose on her vision and success path. After the recent blockbuster ‘Prem Ratan Dhan Payo’, Sonam Kapoor has surely entered the zone of the top actresses of the tinsel town. The diva will soon be seen in the upcoming film ‘Neerja’ which is a biopic on flight attendant Neerja Bhanot.[/tps_footer]