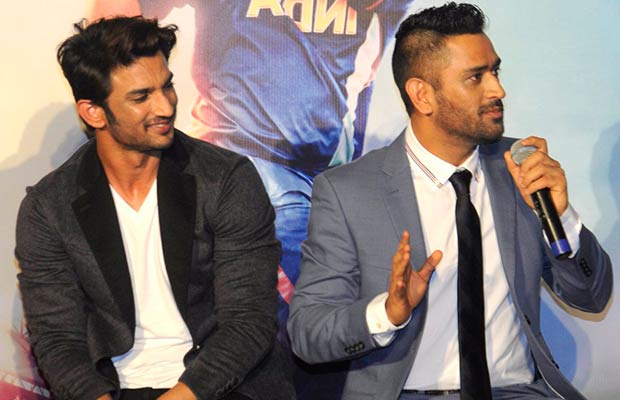 [tps_footer]The trailer of M S Dhoni: The Untold Story was out yesterday. It looks mind-blowing and Sushant Singh Rajput looks like a complete replica of M S Dhoni in the trailer. Well, it wasn’t a cakewalk for the Kai Po Che actor to portray living legend MS Dhoni’s character with such brilliance.

The duo got candid at the trailer launch and were sharing a lot of experiences while making the film. Sushant even mentioned that at one point the Captain cool even lost his cool. He said, “For the first time I have seen Dhoni losing his cool. First two to three days I asked him some questions and he answered them calmly. Then he said you ask a lot of questions let me come back. I was just asking him one question in different ways again and again.”

To this, the Indian skipper added, He (Sushant) used to ask one question repeatedly and if he gets a similar answer then he used to believe that I am being honest and then he used to go to next question.” The cricketer further added, “It was a bit awkward initially to speak about yourself. After 15 mins you get bored talking about yourself and I was like I need a break, I am going.”

Well, we are happy Sushant’s constant questioning and annoying Dhoni a bit helped him to portray his character so perfectly. The trailer received a huge positive response. Fans went berserk after watching the trailer. Directed by Neeraj Pandey, the film also stars Anupam Kher, Bhumika Chawla, Rajesh Sharma and Kiara Advani. It will release on September 30.