Kamaal R Khan has always been in the news for creating nuisance and seeking attention with his absurd behaviour. Well! After having so many Twitter tiffs, here comes yet one another in his list.

When Karan Johar launched the poster of Anarkali of Aarah starring Swara Bhaskar, he not just launched it but also praised her and wished her luck.

This is what Karan Johar wrote in his tweet about Swara Bhaskar,

“Well done @ReallySwara for constantly breaking ground!! 24th march is the date guys ! For this new world and engaging film!!! 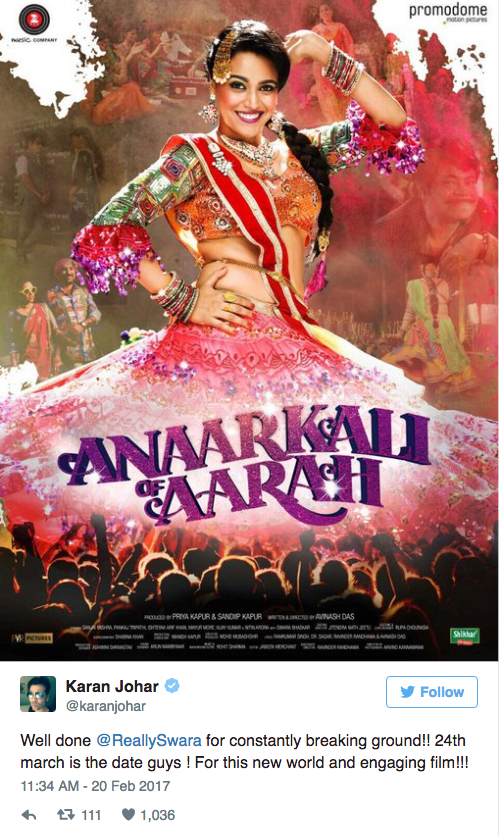 Looking to it, KRK couldn’t stop from tweeting and poking his nose like always. He then wrote to Karan Johar,

“Sir @karanjohar it will not be a flop or washout, but it will be super duper disaster of the year coz KRK says so. 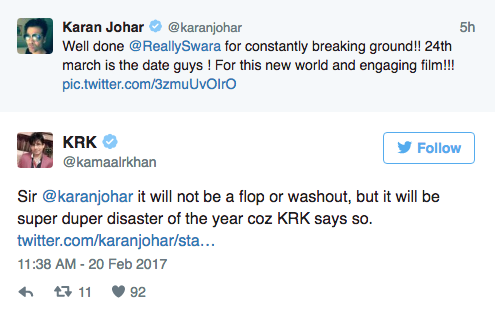 When Swara read about it, she replied to it and said in just one tweet such that KRK went numb. This is what Swara Bhaskar said,

“Kuch logon ki gaali, compliment hoti hai! 🙂 Thanks @kamaalrkhan the unasked filth u spew is a character certificate for us! ?? Appreciated.

This is not the first time when KRK has been slammed by a lady. He has also messed up with Sonakshi Sinha and Lisa Haydon and these girls have taken down to awesome tweets in return that let him down.

Well! No wonder what pleasure KRK attains in creating nuisances like these.