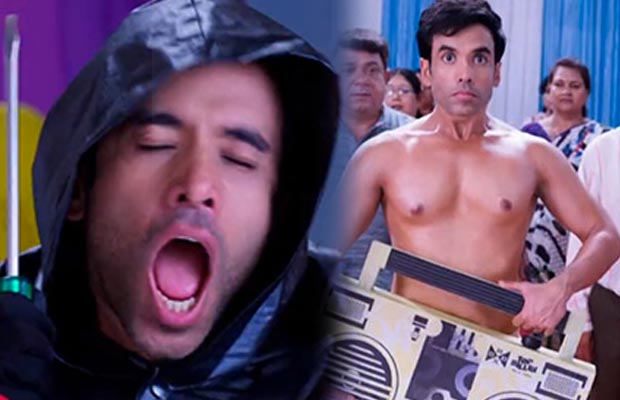 [tps_footer]The first of the ‘Kyaa Kool Hain Hum’ films released in 2005 starring Tusshar Kapoor and Riteish Deshmukh. The duo were recast for the sequel in 2012 but by part 3 Deshmukh had either grown up or grown out of the franchise leaving Aftab Shivdasani available to fill his shoes. Not much has changed in the 11 years except that the jokes have become repetitive and even more puerile.

Kapoor plays Kanhaiyya whose father (Shakti Kapoor) throws him out of the house for being clumsy and no-good, but the fault is really that of the filthy-minded Rocky played by Shivdasani. Down and out, they take up the first offer they get – to join their friend Mickey’s (Krishna Abhishek) p**n movie business conducted out of a mansion in Thailand. While on the one hand they are becoming adult movie stars, on the other Kanhaiyya, who for some reason cannot handle the colour red (it makes him cockeyed), falls in love with a desi beauty (Mandana Karimi). As they contemplate marriage, Kanhaiyya must first introduce his family to father in law to be, the very traditional and ‘sanskaari’ Karjatya (Darshan Jariwala) who walks around all day with his parrot on his arm.

At short notice, Mickey and his p**n actors pose as Kanhaiyya’s sisters, brothers in law and father. You can imagine the confusion and nonsense that follows. Sure, the idea of spoofing Bollywood movies as p**n is amusing – there is a particularly good scene with Shivdasani parodying Thakur from ‘Sholay ‘(or Kholay as its called here) and Ajay Devgn from ‘Singham’ (Chingam). But the gags are lost in the noisy and dumb script that is lazily directed film and clomps along to an apathetic finish.