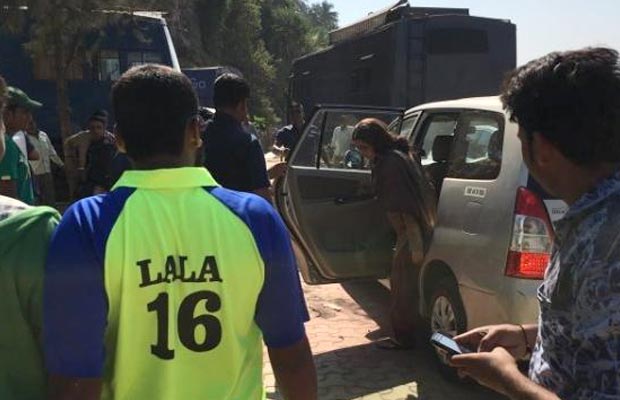 [tps_footer]Aishwarya Rai Bachchan is all set for the ‘Sarbjit’ biopic. The sensitive biopic which will tell the tale of Sarabjit Singh has already initiated with its shooting schedules. Aishwarya will be seen playing the role of Dalbir Kaur i.e. Sarabjit’s sister. Aishwarya Rai Bachchan is leaving no stone unturned to look promising for the film ‘Sarbjit’. The film is based on the life of Sarabjit Singh who was an Indian farmer and was then convicted for terrorism and spying. Sarabjit Singh spent 22 years behind the bars in Pakistan and met with a tragic end.

The film is a biopic of the whole incident and will also star actors Randeep Hooda and Richa Chadha. Actor Randeep Hooda will play the central character while Richa might be seen as his wife. Aishwarya Rai Bachchan’s look from the film ‘Sarbjit’ is revealed; the actress has shed off her glam avatar and has donned a highly simplistic look.

With grey hair and huge spectacles, Aishwarya is unrecognizable in the look. The actress is seen wearing a loose ill fitted salwar kameez for the role. Talking about Aishwarya Rai’s look in the film, make-up artist Subhash Shinde stated, “Sarbjit’ is a very challenging film for me. For ‘Sarbjit’, I had to spend a lot of time on research. I am quite thrilled about this project. Since, Aishwarya (Rai Bachchan) is playing Sarabjit’s sister (Dalbir Kaur) in the film; her look will be de-glam… with minimum make-up.”

Subhash Shinde who is responsible for Aishwarya Rai Bachchan ’s look in the film ‘Sarbjit’ confessed that this film is a challenging one for him. The artist further commented, “We did the look test a few days back and started shooting for the film a couple of days back.”

Directed by Omung Kumar, ‘Sarbjit’ is expected to be a heart crushing tale and is also expected to fix another feather on Aishwarya Rai Bachchan ’s career hat. ‘Sarbjit’ will hit the screens on May 20th, 2016.