We bring you some leaked photos of Salman Khan doing an underwater sequence from Tubelight.

Salman Khan, who was busy shooting for Tubelight has finally wrapped up the film directed by Kabir Khan. The entire team and makers ended the film with a grand celebration. In fact, the buzz is that the Sultan actor’s alleged girlfriend Iulia Vantur was also present there.

Reports say that the last sequence was shot underwater as it was an action sequence featuring Salman. In fact, few shots have been leaked on the Internet and are going viral.

Salman Khan, undoubtedly, is seen wearing a scuba-diving suit and is seen under the blue water. Many other people are also surrounding him, possibly could be the trainers or team members with all the safety arrangements. Well! The pictures look amazing and are making us curious about how the film will be.

One of the fans shared pictures on Twitter of the actor expressing his excitement about the movie. This is what he wrote,

Tubelight, directed by Kabir Khan and starring Salman Khan is slated to hit the screens this Eid. Surprisingly, the film has a cameo of Shah Rukh Khan and the Raees actor has already shot for the film. It will be after so many years that we’ll get to see the two together on screen.

Well! We just can’t wait to watch this film. 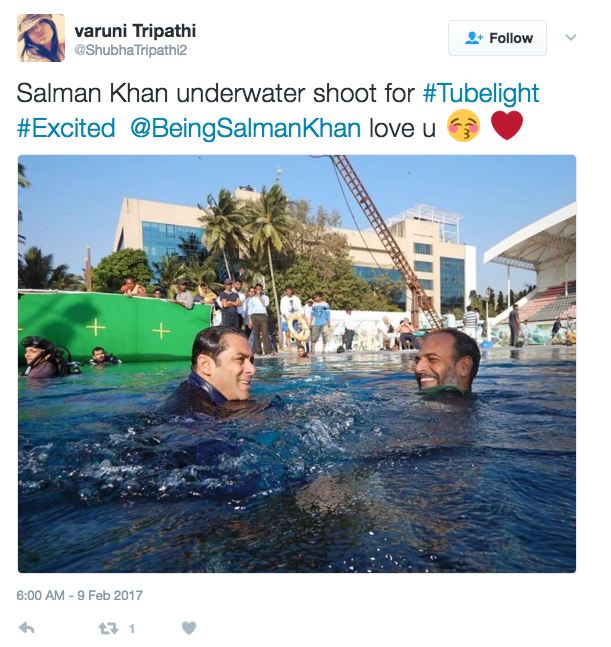