Bigg Boss 10 contestants Manveer Gurjar and Manu Punjabi are gearing up next for this show!

As earlier we reported, Bigg Boss 10 contestants Manveer Gurjar and Manu Punjabi finally met each other yesterday in Mumbai. The best buddies of Bigg Boss were accompanied by another aam aadmi contestant Navin Prakash.

The trio was seen having lots of fun together and were also seen interacting live with their fans on Facebook. We also revealed that the two buddies are here in Mumbai for the shooting of a show on Colors channel. Well, now we bring more details about the show. How the two have bagged their first television appearance after Bigg Boss 10.

As per our source, Manu and Manveer are shooting for Colors channel’s upcoming comedy show, ‘Chhote Miyan Dhaakad Chapter 4’ that sees kids as standup comedians. Yes, it’s the same show in which Salman Khan’s younger brother Sohail Khan and actress Neha Dhupia will be seen as the judges. Also, remember when the two stars had come to promote the show on ‘Bigg Boss 10’ finale stage, accompanied by a bunch of talented and naughty children?

Well, it’s not clear if Manu and Manveer will be seen as co-hosts on the show or are making a special appearance. But seeing them together again is surely going to be fun. Manu also shared a picture of him with Manveer from the sets of the show and captioned it. He wrote, “Manu manveer (yeh dosti hum nhi chodege chodege dumm mager tera sath naa chodege..”

How excited are you? Share your views on the same in the comments section below! 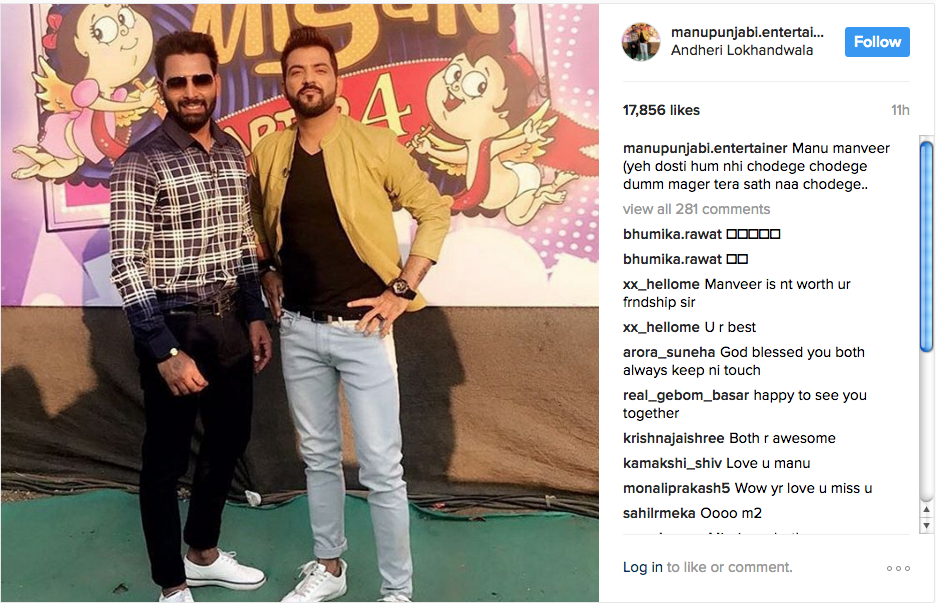