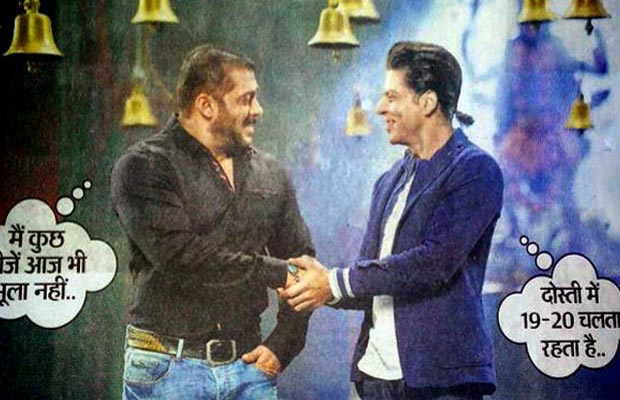 [tps_footer]Bollywood actors Salman Khan and Shah Rukh Khan surely share a good bond with each other now and finally after a wait of 8 years both the actors are coming together to share the same stage. Its known to all that Shah Rukh Khan will soon be seen with Salman on Bigg Boss 9‘s weekend episode for the promotions of his much-awaited film Dilwale.

Yesterday, foe turned friends Shah Rukh Khan and Salman had shot for Bigg Boss 9 promo at a studio in Mumbai and now we bring the glimpse of the promo. While people are impatient to see them together, we bring a adorable picture of them from the promo where the duo are seen shaking hands. The backdrop of the picture showcases that the audience will witness actors recreating the same old magic of their most iconic movie Karan Arjun. Reportedly, you will also get to see SRK and Salman Khan showcasing a bit of their bitter times as their fight is known to all now.

Now that the duo are finally coming together for the show, we wait to catch what more do they have for their fans and we totally expect a worth watching episode of entire Bigg Boss 9 season.

From doing Dubsmash for each other to praising each other on the social media platform, we wait to catch what the two handsome hunks have for the audiences on Bigg Boss 9. We are eagerly waiting to see them together, are you all too?[/tps_footer]