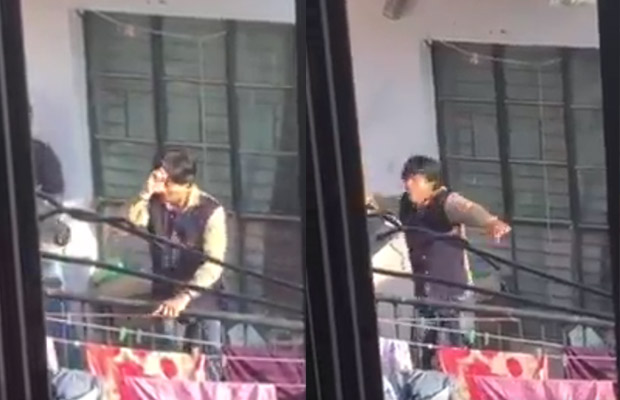 [tps_footer]Fans are very much excited to catch their favourite star Shah Rukh Khan in his much-talked upcoming film ‘Fan’. Shah Rukh Khan who was not active on twitter since December, a day ago, took to his twitter handle to share five teaser videos from a YRF movie, which shows a fan’s obsession for the world’s biggest movie star named Aryan Khanna. The five teaser videos show how fans are passionate and obsessed of their favourite superstar and its impact in their life.

Well, now we have got our hands on a leaked video of Shah Rukh Khan from his upcoming film ‘Fan‘. After ‘Dilwale‘, SRK’s film ‘Fan‘ is the most awaited film of the year, which is already abuzz. The impact of stars in fans live is truly to be wondered and with that a fan has leaked a video of SRK dancing on a building’s balcony.

A crazy fan shared the video of Shah Rukh Khan on Facebook which shows SRK as Gaurav from his film ‘Fan‘, dancing crazily. In the leaked video, one can see SRK in his charming looks dancing energetically on a building’s balcony.

In the background, one can hear the song “Mere Dil Ke mobile ka tu unlimited pack ho gaya….Mein tera fan ho gaya…“, which seems to be the title track of the film. With this leaked video, the excitement to know about the film is already high among the audiences.

Directed by Maneesh Sharma and produced by YRF, ‘Fan‘ is the story of a superstar and his crazy biggest fan. Shah Rukh Khan will be seen playing the role of superstar Aryan Khanna and also of a fan named Gaurav. Reportedly, the film is slates to release this year in April.

Once a fan, always a fan![/tps_footer]