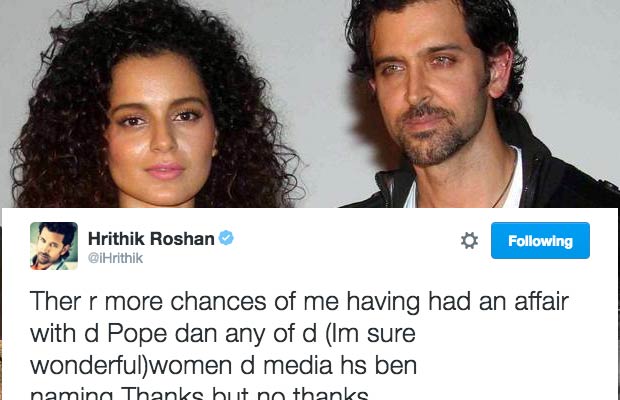 [tps_footer]Hrithik Roshan was initially always away from the controversies, well these days he has become a synonym to the same. Hrithik is not only loaded with one legal battle with Kangana Ranaut, another legal matter has now made an entry into the actor’s life. Hrithik and Kangana’s notices to each other revealed way too much.

The two actors are at loggerheads currently with their blame games and war of words. Queen actress Kangana Ranaut started this war by indirectly referring to Hrithik as her silly ex. The comment did not go down too well with the Bang Bang actor and he commented on the microblogging site Twitter saying, “Ther r more chances of me having had an affair with d Pope dan any of d (Im sure wonderful)women d media hs ben naming.Thanks but no thanks.” 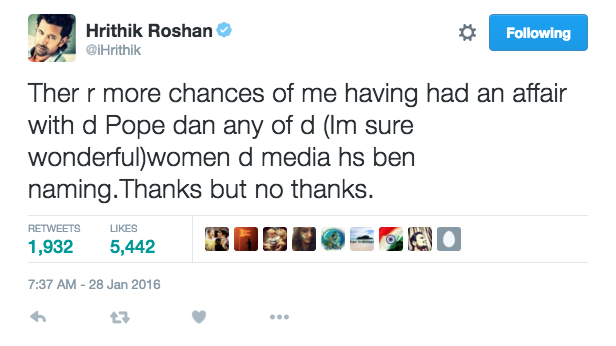 Well, the Mohenjo Daro actor tweeted quite promptly and he could not have imagined the consequences. A legal notice has been filed against Hrithik for hurting the religious sentiments of the people. The legal notice was given by Abraham Mathai, the former vice chairman of the State Minorities Commission. The notice against the actor states that his Pope tweet is hurtful to the sentiments of the Christian community.

Yes! Hrithik Roshan has smartly changed the course of the debate by claiming that the word pope refers to the Eurasian Ruffe freshwater fish which is also called as pope![/tps_footer]