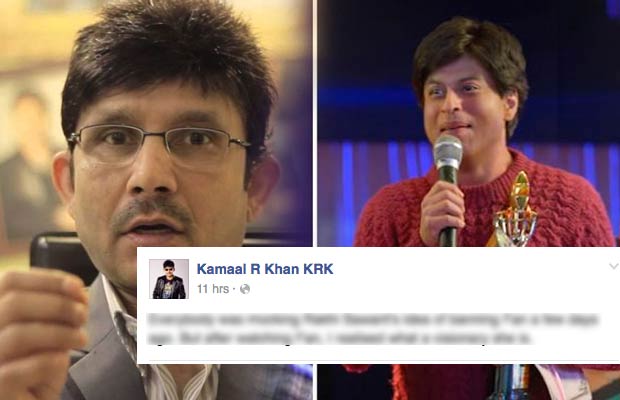 [tps_footer]Bollywood actor Shah Rukh Khan‘s much-talked film Fan was released on April 15 and since then the film has been getting spectacular praises for its unique storyline. The film was one of the most anticipated films of the year and it seems has won many hearts.

From critics to the audience, each and everyone is in praise for Shah Rukh Khan and his film. The film is winning appreciation from the audience across the world and the reason behind the rave reviews is undoubtedly superstar Shah Rukh Khan himself. Not just with emotions and appreciation, Fan is going well with good numbers at the Box Office too. In fact, the film has made its place in 100 crore club with smashing box office collections.

Well, the film has managed to impress everyone, but a “2 Rs people” person has something else to say about SRK’s ‘Fan’. Motor mouth Kamaal Rashid Khan aka KRK, recently shared a message on his Facebook page, which reads, “Everybody was mocking Rakhi Sawant’s idea of banning Fan a few days ago. But after watching Fan, I realised what a visionary she is.”

It was expected that commoners would abuse him over his review on SRK’s Fan. While his review is least considered and bothered, people have abused and reacted on his latest post with hilarious comments on Facebook. We are sure this will make you laugh out loud and you can’t miss the epic reactions of people.