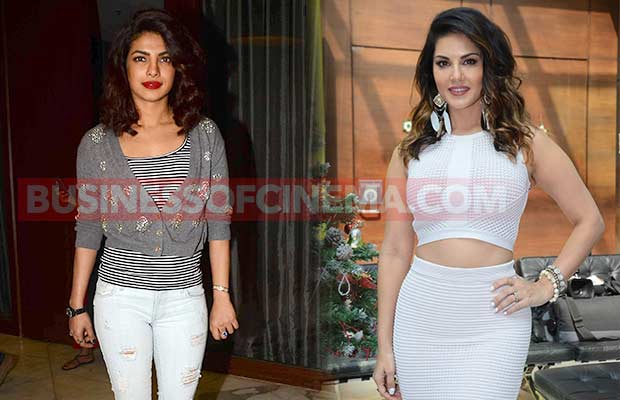 [tps_footer]Priyanka Chopra is undoubtedly too happy with the success of her recent film ‘Bajirao Mastani’. Not only has the film received laurels for its execution and characters but Priyanka too has garnered all the compliments for her acting skills. The gorgeous actress is on cloud nine not only with the success on the home front but also with the global recognition she received from the American drama series Quantico.

Beautiful actress Priyanka Chopra has surely received the label of the most versatile actress of the tinsel town. The starlet as we all know is very active on the micro blogging site Twitter and there is someone else who is bonding amazingly with Piggy Chops. Sensuous actress Sunny Leone seems to be all smitten by Priyanka Chopra, the two beautiful girls are chatting their hearts out on the micro blogging site twitter.

Recently, reports abuzz made headlines with the statement that Priyanka Chopra did not want to share a picture with Sunny Leone. Many reports suggested that Priyanka was not too keen to get photographed with Sunny. However, rubbishing all the rumors, Priyanka took to Twitter and tweeted, “I love how things r sensationalised out of context! Standing and taking pics with @SunnyLeone makes me look bad cause she is stunning! Lol!” 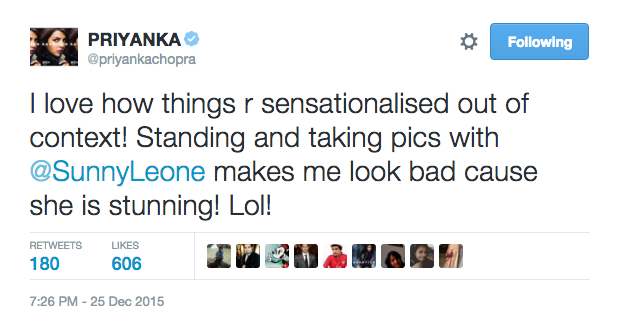 Amazing actress Sunny further replied saying, “@priyankachopra I feel the same about you darlin. Media can be mean sometimes.They just wish it was them taking pics with you. Lol xoxo.” 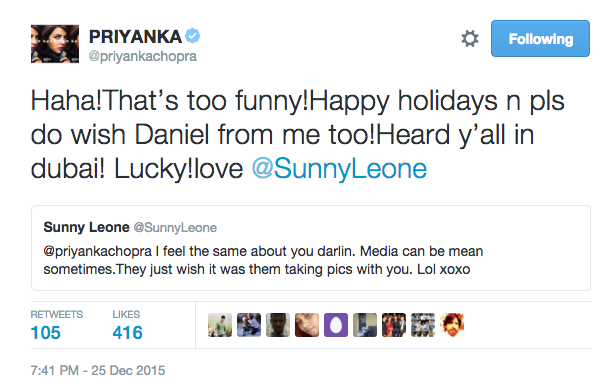 Well, seems like the two most magnificent looking actresses are bonding big time. Sunny Leone is setting the hotness meter high with her upcoming film ‘Mastizaade’, whereas Priyanka Chopra is gearing up for the film ‘Jai Gangaajal’ after the immense success of ‘Bajirao Mastani’.[/tps_footer]