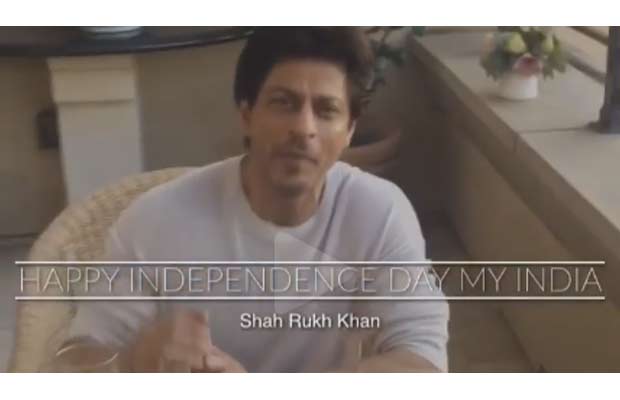 Superstar Shah Rukh Khan may not be in India, but he saw to it that he wishes Independence Day to all fellow Indians. The actor, who is currently in U.S. posted a video on his Instagram and shared his wishes to all. It has been 70 years since India achieved independence and thus everyone is delighted including Bollywood celebs.

He captioned his video, ‘Happy Independence Day to my country women & men 15th Aug 2016. A day of Pride, Happiness Love & Living freely.’ In the video, SRK also talks about tricolour gifts from his children Aryan, Suhana and, AbRam. The actor is all smiling in the video.  Shah Rukh has been a part of several patriotic movies like Dil Se…, Phir Bhi Dil Hai Hindustani, Swades, Main Hoon Na, Swades, and Chak De! India. His film Veer Zaara is also an exceptional film. His performance in Swades and Chak De had him receive many acclaims.

Shah Rukh Khan will soon start shooting for Imtiaz Ali’s next opposite Anushka Sharma. The film is tentatively titled as The Ring. His upcoming film Dear Zindagi, starring Alia Bhatt will release on November 25. King Khan is also a part of Aanand L Rai’s next. He will essay the role of a dwarf in the film. His much-awaited film Raees is supposedly releasing on January 26, 2017.