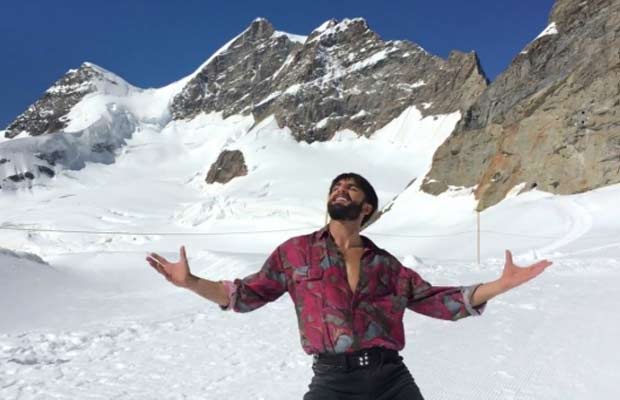 Ranveer Singh is one of the bold actors we have. Not only by his words,also in action. The actor doesn’t shy from doing anything. He isn’t worried about getting judged by people for his bindaas nature. We’ve seen many times the actor has done some wonderfully weird things that made us laugh. From dancing on the streets to imitating Taher Shah, Ranveer has done everything. Well, this time, the actor did something the will definitely make Shah Rukh Khan happy.

The Bajirao Mastani actor is current;y holidaying at Switzerland. Well, Switzerland is YRF’s favourite destination to shoot love songs. Ranveer started off his career from YRF. SRK is also YRF’s favourite boy. Well, King Khan started his career with Yash Raj with the film Darr, that made his more popular. Yesterday, Ranveer imitated the song Tu Mere Saamne From the film Darr. He tweeted the video of the same.

Well, Ranveer looks superb in the video. No one else could have done it so fantastically as he did it. The boy gave us many reasons to be fond of him. Keeping his actor status aside, he does what he wants and that’s why people adore him.

Ranveer has recently wrapped up Aditya Chopra’s Befikre. Vaani Kapoor is also a part of the film. Few posters of the film were out and they look very sensuous. The film will hit the screens on December 9. Apparently, SRK got the role Ranveer was given in Padmavati. Nothing official is yet out. The film will also have Deepika Padukone and Shahid Kapoor in pivotal roles.