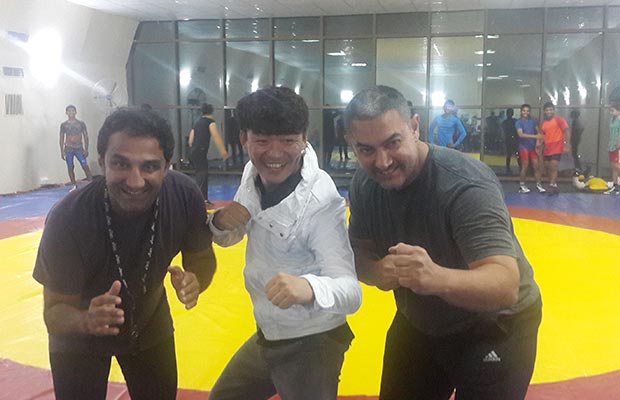 [tps_footer]Wang Bao who had dubbed for Aamir Khan in the Chinese version of PK recently paid a visit to Aamir on the sets of his next in Ludhiana.

The Chinese superstar had specially flown down to India to meet Aamir. He was very curios to know how Aamir Khan works and wanted to witness himself. Wang spent a good 4 days with the entire unit and the actor.

The two superstars had initially met earlier during Aamir‘s trip to China for the release of PK which created tremendous business in the Chinese market! The film has gone ahead and become the highest grosser in China creating a phenomenal business! Infact, after meeting both of them have stayed in touch ever since!

The two had a brief interacted back then and had hit it off very well! Infact while Wang was there in Ludhiana he also got to witness Aamir‘s wrestling moves which the actor has been prepping for his character as a wrestler in his forthcoming film.

Spokesperson of the film confirms the news and adds, “Wang Bao Qiang was keen to witness Aamir’s work pattern first hand. He planned an impromptu visit to India on learning about Aamir’s long shoot schedule in Ludhiana for Dangal”.