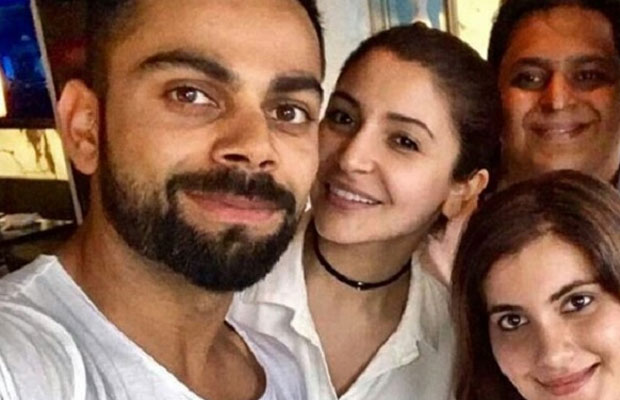 Recently, the two were spotted at a restaurant having lunch and thanks to the owner for having snapped a picture with them that it got loaded on social media.  As the two headed towards Pune for spending some time together, the restaurant owner Rohan Pate’s wife Amrita took a group selfie and posted it on Facebook. Also, before it could be taken off, the fans instantly took to the post and shared it. The picture got viral instantly.

Well! All the efforts by the two to keep their relationship a secret are going waste after all, they’ve the most likable couple and on the ladders of super success. Why wouldn’t they be stalked?

Moreover, after Virat shared pictures with Anushka Sharma captioning, “Everyday is a valentine day if you want it to be. You make everyday seem like one for me.”

Now that’s something really sweet. The two on one side are not being open about it but then are giving subtle hints by doing so. Let’s see when they officially declare their love.

Virat Kohli on his career front, took oath as the Captain of Indian cricket team and is on a great success as a captain at his initial stage. Anushka Sharma after Ae Dil Hai Mushkil is now promoting Phillauri.