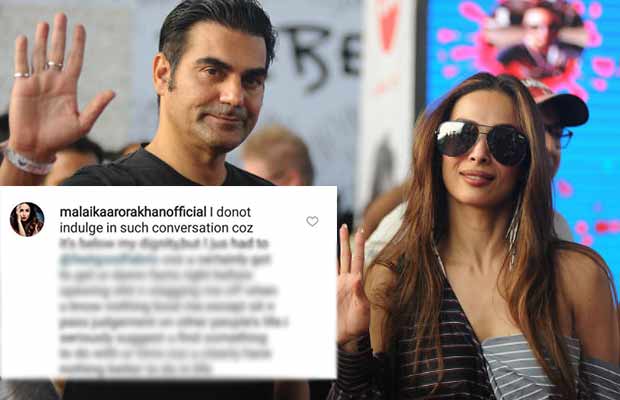 A follower accused Malaika Arora of feeding off her ex-husband Arbaaz Khan’s money.

The Bollywood actress Malaika Arora, although not successful as an actress, has surely made her name in the industry with her other works. She is famous especially for her dance numbers like ‘Chaiyya Chaiyya’ and ‘Munni Badnam’.

She has judged some of the most famous reality shows on Indian Television including ‘Jhalak Dikhhla Jaa’, ‘Nach Baliye’ and ‘India’s Got Talent’.

Recently, she made an Instagram post sharing her beautiful picture. On the same picture, one of the Instagram users trolled her for enjoying on her ex-husband Arbaaz Khan’s money.

Super excited to be affiliated with Khanna Jewellers @khannajewellerskj as their brand ambassador. Crafted to perfection, their stunning statement jewellery is a must have for every jewellery lover. #khannajewellers…#maksquad❤️ #hair @hairbypriyanka #stylist @manekaharisinghani #manager @ektakauroberoi #mua? @subbu28 #photographer @prasdnaik

A post shared by Malaika Arora Khan (@malaikaarorakhanofficial) on Aug 2, 2017 at 6:20am PDT

The man wrote, “This what these sh** women do these days. Marry a rich guy then divorce him for huge alumni. And then have fun with that alumni. Why do u need alumni if u are capable of earning. I respect people and not the gender.”

He even said, “ Her life now is aal about wearing short clothes, going to gym or salon, enjoying the vacation. Do u seriously have any work, Or just feeding urself on the husband’s money? The word is alimony.”

Although Malaika never bothers to respond to such comments, the actress lashed out this time like never before.

Responding to the troller, she wrote, “I do not indulge in such conversation coz it’s below my dignity, but I jus had to coz u certainly got to get your damn facts right before spewing s***  n slagging me off when u know nothing about me. Except sit and pass judgement on other people’s life, I seriously suggest you find something to do with ur time coz you clearly have nothing better to do in life.” 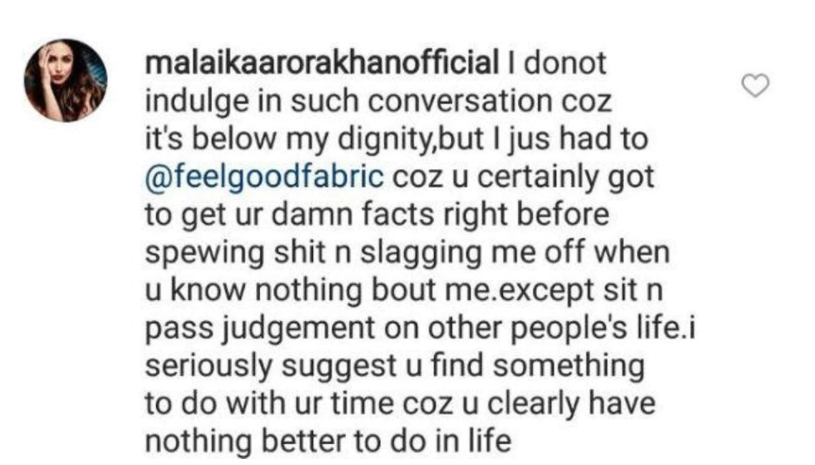 Malaika Arora was married to actor-director-producer Arbaaz Khan. After staying in the relationship for 18 years, the couple parted ways with each other in 2016.