Amul is known for their satirical takes on the current happening in India or the events that affect India. They have recently come up with a witty piece on the recent controversy surrounding Sanjay Leela Bhansali’s Padmavati.

This one has Deepika Padukone’s caricature and the Amul girl, with caption ‘Hairani Padmavati?’, which literally translates to ‘surprised Padmavati?’ taking a potshot at all those who claim to know the history. It also had another caption ‘A Slice Of History!’ 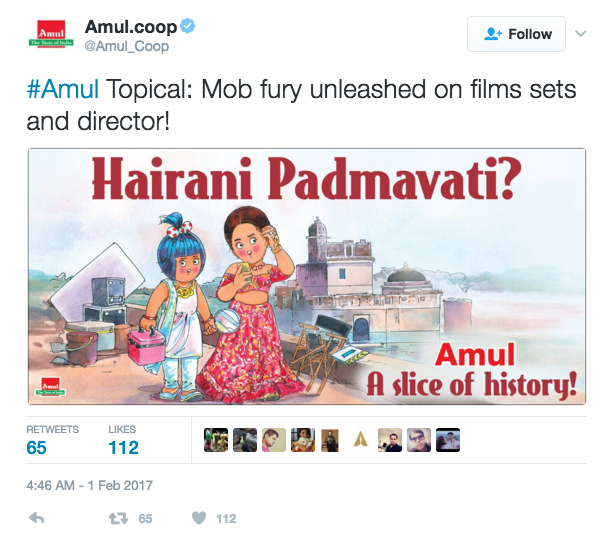 The recent incident shook everyone, when Bhansali was assualted by the self-proclaimed saviours of history while shooting in Rajasthan. The video that went viral was shocking as well as appalling. This was based on a mere speculation of a love dream sequence between Rani Padmavati and Alauddin Khilji.

Padmavati, starring Deepika along with Ranveer and Shahid has managed to stay in news for some reason or the other. Imagine, even before the film went on shooting floors.

The initial buzz was created by the reported ego clashes between the two male leads of the film. Which also became a bone of contention between the alleged lovers, Deepika and Ranveer. It also had other issues like script issues and financial trouble.

Overcoming all the odds, the film has finally started its shoot on November 2016. With the release date as November 2017!

Watch: SHOCKING!! Sanjay Leela Bhansali Slapped By A Bunch Of Protesters In Rajasthan On Padmavati Sets