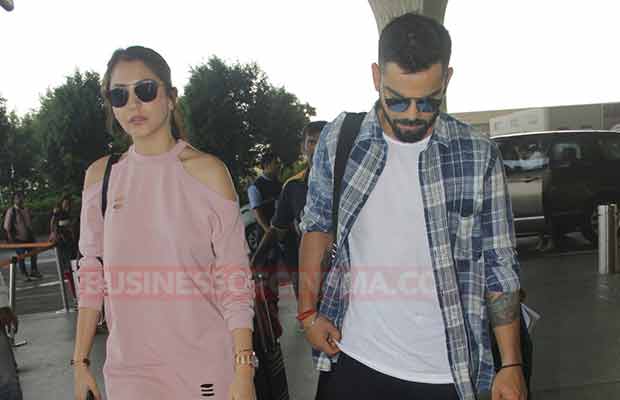 We have been eagerly waiting for Anushka Sharma and Virat Kohli’s return to India!

Bollywood Actress Anushka Sharma and Indian Cricketer Virat Kohli’s wedding was a very hush-hush affair away from the hustle of India. The intimate ceremony was attended by their families and close friends in Tuscany. Even though the wedding was held on Italian soil we are told that it was a strictly Hindu-Punjabi affair! Right from the dhols beating and the pre-wedding ceremonies! From the pictures that have surfaced, the wedding was a scene out of a fairytale! Anushka looked like a princess in her bespoke Sabyasachi Mukherjee trousseau.

After a few days, the couple will head to Delhi, wherein they have their first reception. On December 21st, the couple is hosting a reception for their families. The second reception will be held in Mumbai the day after Christmas on December 26th. This will solely be for their industry friends and Virat’s fellow cricketers.

It is speculated after their receptions in India, the couple will be flying to South Africa to ring in the New Year together. There Virat Kohli will also be prepping and playing for the upcoming India vs South Africa ODI Series. In the first few weeks of January, Anushka Sharma will return to Mumbai to resume filming for her upcoming Aanand L Rai’s untitled movie starring Shah Rukh Khan. She will also start shooting for the upcoming Yash Raj Films’ produced ‘Sui Dhaaga’ opposite Varun Dhawan.