After the much talked about marriage in 2015 and pregnancy this year, Shahid Kapoor’s wife, Mira Rajput is all set to be on the Koffee with Karan season 5 with hubby Shahid. Giving a complex to all Shahid’s female fans, she is finally set to make her appearance on television for the first time. Following the most interesting episode with Twinkle Khanna by having her on the couch, Karan thought it would be interesting to have Mira Rajput talk about her marital life and relationship with Shahid.

This is the first time that the two will be seen together on television. The Udta Punjab actor recently shared a picture on social media with his wife on the couch. As per sources, Karan wanted an unusual couple that had not come before and so, who would have been better than Shahid and Mira Rajput themselves! Shahid and Mira Rajput expressed their desires to be on the show too, as per sources.

While the lady Kapoor will debut this season as a guest, Shahid has already been to the quirky chat show with Kareena Kapoor, Priyanka Chopra and Sonakshi Sinha and interestingly, he has dated all these women in the past. But the fans are desperately waiting to hear about Shahid straight from his wife. The episode is expected to be an interesting as we get to hear their love story, how Mira Rajput views Shahid’s films and whether she desires to join the industry.

The excitement of having star wives on the couch geared after Twinkle’s witty comments and comebacks on Karan’s rapid fire. Her answers left both Karan and husband Akshay flabbergasted. The show later saw unexpected duo of Deepika’s ex boyfriend Ranbir and boyfriend Ranveer Singh.

This shows how Karan is being quirky this time having unexpected pairs on the couch. As per sources, the Khan brothers Salman, Arbaaz and Sohail have shot the 100th episode of Koffee with Karan. Wow! This season surely seems to be promising and exciting. 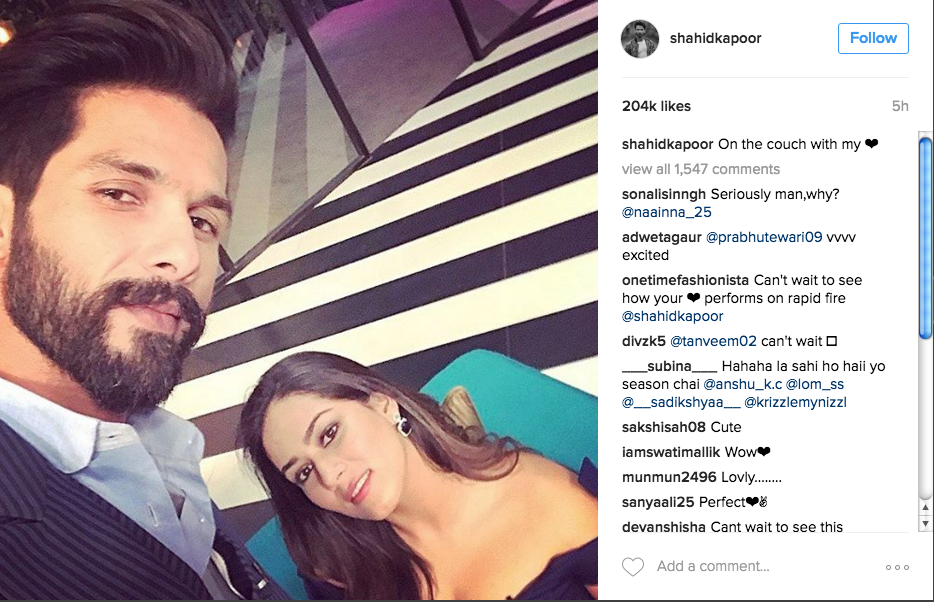