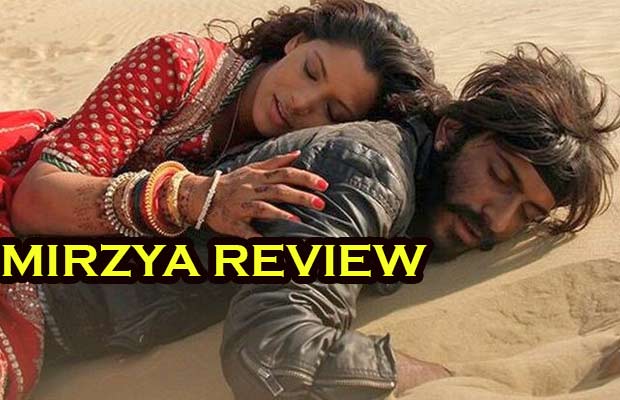 Based on the story of fated lovers Mirza-Sahiban, director Rakeysh Omprakash Mehra’s Mirzya is a reimagining of the Punjabi folk tale. Based on a script by Gulzar, this epic love story plays out in two time zones – contemporary and fantasy. Harshvardhan Kapoor and Saiyami Kher play Monish and Suchitra in both the imaginings. While the parallel fantasy story – which is rather Game of Thrones in its styling – stays truer to the original with Sahiban breaking Mirza’s arrows thereby ensuring his death, in the contemporary time band Mehra and Gulzar explore what might have led to the deaths of Monish and Suchitra.

In the vein on Romeo and Juliet, here too class politics, a grizzly past and a feudal resolution entrap the childhood friends who were torn apart by crime and punishment in childhood and rediscover each other in adulthood. The narrative cuts back and forth between the warm sands of Rajasthan – home of stable-hand Monish (Harshvardhan Kapoor) and police officer’s daughter Suchitra (Saiyami Kher) betrothed to handsome young prince Karan (Anuj Chaudhary) – and the stark landscape of Mirza-Sahiban’s Ladakh. In between contemporary dancers in twist and leap gazelle like narrators filling in gaps in the story.

Monish and Suchitra’s passion and undying love upsets her papa policeman (Art Malik) and fiancé. Clearly she does not think it through when she shows up at the stables in the middle of the night, soaking wet in the rain. The path ahead is slippery. Every few scenes editor P. S. Bharathi Mehra cuts away to the fantasy world or to whirling dancers in rich handloom costumes and folk singers add another element to Shankar-Ehsaan-Loys’ drum-heavy soundtrack. All these are deviations that finally deny the story of its emotional heft and build up of drama and characters.

Exquisitely shot by Pawel Dyllus with remarkable action sequences by Danny Baldwin, Mehra no doubt crafts a visually stunning parable but relies too heavily on theatrics. As for the young new faces, while Chaudhary is enjoyably stiff and charming as the prince, Kher is saddled with a character that is devoid of gumption in the present but she is stunning as the imaginary leather-clad Sahiban. Kapoor displays first-timer fumbles – an inconsistency in performance that matches the choppy storytelling.