Seems like we are going to have a double dose of Arjun Kapoor in his upcoming movie Mubarakan. The Ki and Ka actor, shared a picture on Twitter which has now set the expectations that much higher for the movie. He captioned it as: “Meet Karanveer Singh and Charanveer Singh #MubarakanFirstLook @MubarakanFilm #SonyPicturesNetworksProductions #Cine1Studios”

In this upcoming Anees Bazmee film, Arjun plays a twin brother, Charan and Karan. Interestingly, one of the twin brothers is a sardar. Reportedly, the 2 States actor, who is playing a Sikh character for the first time, has undergone extensive preparation for the role before he begins shooting in Chandigarh this week. He has paid special attention to dialect and accent for essaying this role to the T. Apart from Chandigarh, the film, which is a labeled as a family riot, will also be shot in London.

Anil Kapoor too shared the look with a message that reads, “Shaadi mein chaar-chand lagane aa gaye hain @arjunk26 paaji! #Mubarakan fever setting in!!!”  This is the first time that chacha-bhatija are sharing the screen space. Anees Bazmee has worked several times before with Anil in films like No Entry, Welcome and Welcome Back. This time he has roped the duo to create the biggest family entertainer. 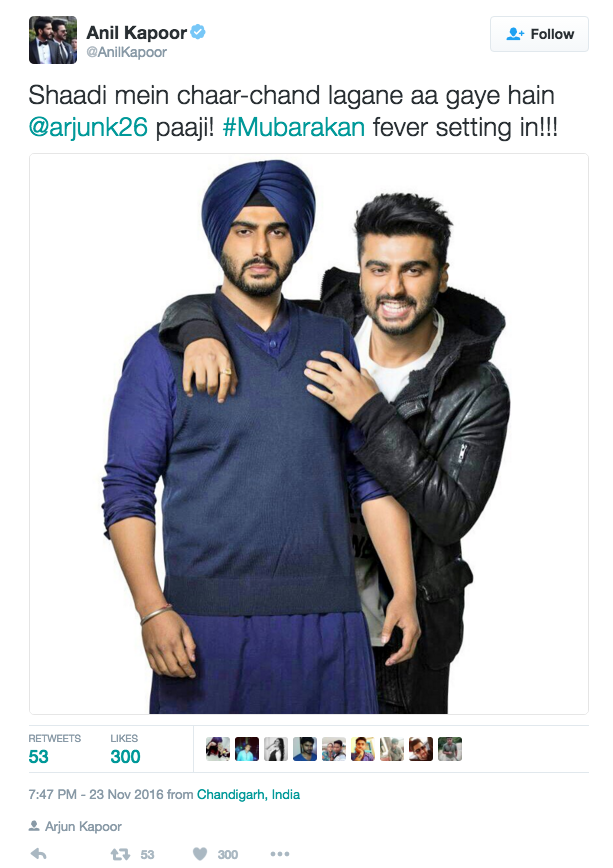