The 22-year-old Canadian pop-star punched an enthusiastic fan so hard that it left him split and bloodied lip while arriving at a concert in Barcelona. In the video, Justin Bieber hits his male fan through the open window of his car while being driven by his chauffeur to the city’s Palau Sant Jordi for latest stop on his Purpose tour.

The excited fan is seen reaching out to touch the singer while the car moves past at slow speed, but the Grammy-winning singer, Justin Bieber reacts with a punch that makes contact with the fan’s face. 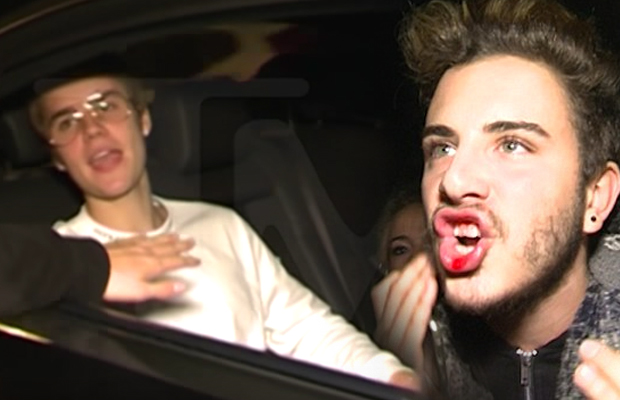 The shocked fan touched his mouth only to realise it’s bleeding and then turns to the cameras showing his bruised lips. A group of girls standing in his vicinity seem to be equally shocked as they notice that he is bleeding. He is then seen spitting out some of the blood as his hand hovers over his mouth.

There are reports that this fan is a minor and intends on suing Justin Bieber for his act of violence. Police confirmed this on Wednesday morning that they were not investigating the incident and said it was up to the victim to decide whether to make a formal complaint.

Justin Bieber has had several run-ins with the law around the world before as well.