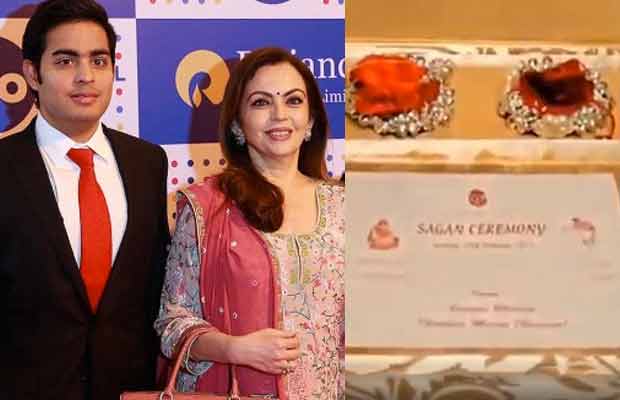 The mystery of Akash Ambani’s Rs 1.5 Lakhs worth of wedding invitation revealed!

We had just taken a breather from Anushka Sharma and Virat Kohli‘s wedding and another wedding was on the cards! Ambani is a name that weaves in our conversations so easily! One of the richest families in the country, Ambanis are always in news. Be it for their philanthropic acts or new business ventures, they are a household name now. It has been speculated for a while that wedding bells might be ringing soon for Mukesh Ambani and Nita Ambani‘s son— Akash Ambani. These rumours only got stronger as a video of a wedding invitation went viral.

The wedding invitation has gold plating, apparently. The black invitation box has an array of dry fruits in it. There is also another ‘sagan’ invitation box in the video. This box has a rose, silver plated dry fruits and cardamom along with the names of the families. Reportedly, the entire box costs Rs 1.5 Lakhs, approximately.

As the rumours started gaining mileage, Reliance issued an official statement, ”A fake video illustrating an alleged wedding card of Mr Akash Ambani – Board Member, Reliance Jio, is being currently circulated on various social media and instant message platforms. We would like to clarify that this video is completely untrue and contains hoax content designed purely for sensationalism.”

There you have it, folks! Akash Ambani’s alleged wedding invitation is nothing but a hoax!

This rumour would have debunked earlier if someone would have just read the ‘sagan’ invitation! The year mentioned on the card is ‘2013’! If that was not enough, the RSVP has been signed under the name of Lazer Footwear Pvt Ltd. It also shows the name of Meena and Naresh Bansal.

Just some overexcited wedding enthusiast looking for some fun! Guess this specific person is still not over the wedding season.