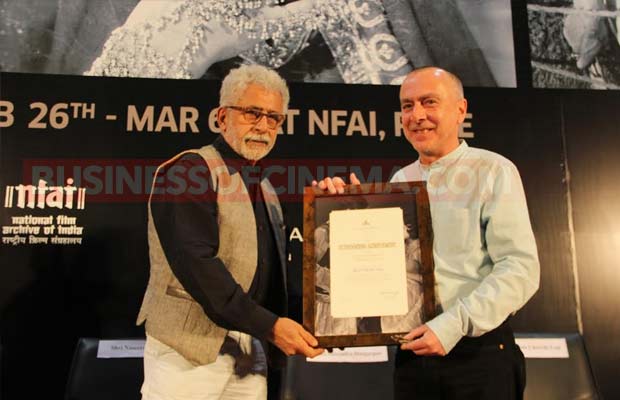 [tps_footer]After having accomplished a successful inaugural edition of an academic initiative focused on Film Preservation and Restoration last year, this year the Film Heritage Foundation in association with Viacom18 have once again joined hands with an aim to save and uphold the legacy of India’s cinematic heritage. The inaugural event, which was held in the National Film Archive of India in Pune saw support from film industry stalwarts such as actor par excellence Mr. Naseeruddin Shah who was the Guest of Honor. At the inaugural event, filmmaker and archivist – Mr Shivendra Singh Dungarpur and Chairman CII National Committee on Media & Entertainment & Group CEO Viacom18 Media Pvt- Mr Sudhanshu Vats addressed the audience about the need to preserve India’s rich filmic legacy.

The workshop titled ‘Film Preservation & Restoration Workshop India 2016’will take place from February 25th to March 6th in Pune and will involve lectures, presentations and practical classes that will be conducted by leading international experts in the field, for cinema enthusiasts who want to learn in-depth knowledge of the subject.

Mr. Naseerudin Shah, in support of the Film Preservation and Restoration Workshop said “It is a matter of great pride for me to be here. On behalf of the entire film fraternity, I would like to thank Shivendra for this initiative. I am very proud that there are 50 films of mine in the archive list here. I can’t thank P.K. Nair Saab enough because he has inspired a generation of youngsters to follow him in his footsteps.”

Extending support to this unique initiative, Sudhanshu Vats, Chairman CII National Committee on Media & Entertainment & Group CEO Viacom18 Media Pvt. Ltd said “What are we doing to leave behind a cinematic legacy for the younger generations? We need to preserve our films not justfor the joy of entertainment but for safeguarding the ideas that help us learn about our cultural heritage. We at Viacom 18 feel honored to be a part of this initiative. I was convinced from the beginning because I believed in Shivendra and his passion for cinema. The movement has to grow now and I am sure it will when everyone comes together to work towards the cause. It makes me happy to know that now there is direct participation from the Information & Broadcasting Ministry of India. And at the end let us all remember, we can plan our future only by reflecting on our past so let’s all join hands together to save India’s cinematic legacy.”

Shivendra Singh Dungarpur, Founder Director, Film Heritage Foundation said, “The first edition was a great success and put us on the map to save India’s cinematic heritage. This year, the workshop is more advanced and intensive with greater focus on film archiving. NFAI agreed to open the doors for us this year. We have big plans and we wish to build an army of film archivists. Funding and technology are essential but we need educated skilled people as well. Film preservation is not a business; it is love… love for cinema. Mr. Sudhanshu Vats and the entire Viacom18 team – I cannot thank them enough. Sudhanshu had the foresight and believed in our vision and today we are celebrating our second year. Here’s to many more years of celebrating and trying to conserve India’s cinematic heritage together.”

With a mix of technical workshops on the craft of preservation and lectures specially designed by David Walsh, Head of the FIAF Technical Commission, there will also be a daily screening of a restored classic preceded by an introductory talk on the restoration. One of the USP’s of this initiative, this year is that Thelma Ross from the Museum of Modern Art, New York will be conducting sessions in the specialized field of documentation and cataloguing.[/tps_footer]