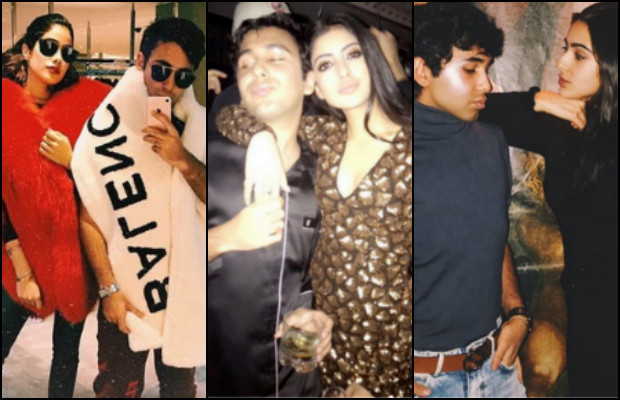 When a star family welcomes a child home, they bring in not just a child but the entire media focus on them. Also, they say, you needn’t do anything to be in the limelight if you’re a star kid. You already seek all the attention. Say AbRam Khan for that matter, the 3-year-old kid is the brightest star and attention seeker already, consider Taimur for that matter, controversy struck him since his birth after the proud parents declared the name. Basically, a star kid is an attention seeker always. Another newsmaker is Sara Ali Khan recently with another group of girls.

What the crux of the story is that the star girls Sara Ali Khan, Navya Naveli and Jahnvi Kapoor have been spotted and been in the limelight. But wait! All the girls have been spotted at different places with one boy who is found with all these girls.

But who is the mystery boy?

Sara Ali Khan, daughter of Saif Ali Khan and his ex-girlfriend Amrita Singh was spotted with the mystery boy openly sharing cosy pictures with the boy. The star kid was openly seen showing off her pictures with the friend.

Also, granddaughter of Amitabh Bachchan, Navya Naveli, daughter of Shweta Bachchan, was also spotted with the boy in her pictures. Navya, been in the controversy long back for having an alleged MMS with Shah Rukh Khan‘s son Aryan Khan is now seen with this mystery boy.

And, last but not the least, Sridevi‘s daughter Jahnvi Kapoor was left nowhere when it comes to showing off her social life. And with whom? With the same boy spotted with Sara and Navya.

Well! seems the boy is the man of the spotlight. Being friends with star kids and beautiful girls of the town, he seems to be a big party animal and a renowned personality who has contacts in the Bollywood world.

Check out the pics!