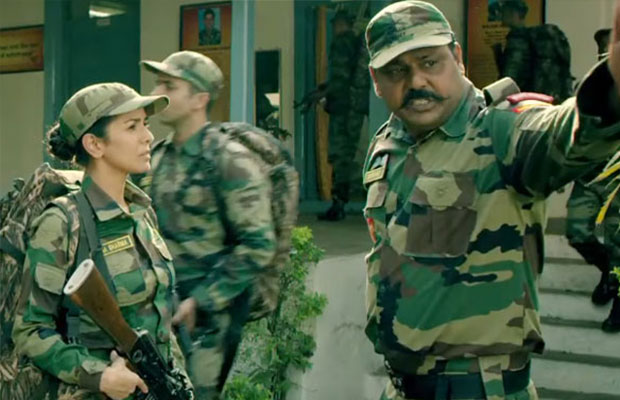 Nimrat Kaur has found her footing in the entertainment world slowly but steadily. She has given some memorable performances in mainstream cinema in movies like ‘Lunchbox’ and ‘Airlift’.

Next, she will be seen in a combat role in the Indian Army, as the lead female protagonist in Ekta Kapoor’s ALT Balaji’s web series ‘The Test Case’. She essays the role India’s first female commando.

For this show helmed by Nagesh Kukunoor, Nimreet had to go through strenuous and rigorous training to portray the role of Captain Sikha Singh. She took lessons martial arts, CrossFit Yoga and ballet to ensure her character looks real on screen. Not just that, she is following a strict diet to be in shape and look relatable to the role.

In the 3 minute video, one gets a feel of what is the strength of a woman. It gives a sneak peek into the life of a woman who is preparing to be inducted in a combat role in the Indian Army and the hardships she faces while her training.

The Test Case also stars Juhi Chawla as Minister Of Defense, Shraddha Pandit and Rahul Dev as Subedar Kirpal Bhatti. While the trailer raises some serious questions about gender equality, it ends with a question, “Does she deserve a chance to die for her country?”

Talking about her role in an interview, Nimreet had said, “Unconventional projects interest me and I am always on the lookout to do something that I have never done before. After Homeland, I was keen to do a show that pushes me as an actor and that’s exactly what I found in this one. The story is set on the backdrop of the Indian army and coming from one myself, I got hooked instantly. What’s exciting about partnering with Ekta for her platform ALT Balaji is the common belief that we need to shake up digital entertainment with power-packed, strong and brave original content. I am pretty certain, this is it”

Nimrat shared the trailer of the series on her Twitter account with the caption: “The tip of the iceberg! No turning back, no time for fear.”

The show will start streaming from April 25.