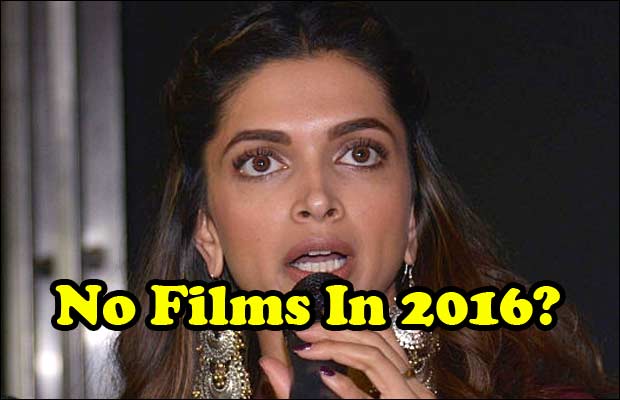 [tps_footer]Bollywood’s versatile actress Deepika Padukone had a very hectic schedule this year with back-to-back films in her kitty. In 2015, Deepika Padukone amazed her fans with two films –Piku and Tamasha. With two films already released, Deepika is all set for the release of her much talked film Bajirao Mastani.

The Piku actress had a busy calendar this year, as she was continuously busy with the shootings of her films. With three films this year, Deepika has no films yet in 2016. In an interview, the actress said that she has found nothing exciting for 2016.

When asked what her fans should expect from her films in 2016, Deepika said, “Expect nothing, because I have signed no films for 2016.”

When asked about not having any film despite being the top actress of the Bollywood, she said, “I have reached a stage where I don’t have to do work to keep myself busy. I don’t want to do films just for the heck of making announcements.”

“I don’t need to do a film to keep my calendar busy. I have read a lot of scripts, but I have not been excited about anything that I have read. I am okay with it.”

At the same time, Deepika is also waiting for the good scripts and is not going to leave any interesting films. “I am not going to let go of films that I am excited about. But if that happens, then you have to balance that out. I am happy with the way this year has gone. I am very proud of Piku and Tamasha and I am topping it up with Bajirao Mastani,” she said.

Well, 2016 is yet to come, but currently Deepika is all busy with the promotions of her much anticipated film Bajirao Mastani opposite Ranveer Singh. The film also stars Priyanka Chopra and is all set hit theatres on December 18 in clash with Shah Rukh Khan–Kajol’s Dilwale.